Like many readers who discovered the world of comics in bookstores rather than comic shops, the works of Alan Moore made an immediate impression on me. He’s a comic book rock star and, undeniably, one of the great masters of the genre. He’s not only written some of the best runs in the business, he was one of the main contributors to the transformation of the medium during the 1980s, which is one of, if not the, best decade in all of comics’ history. His writing is distinctive for being filled with meaning and subtext, layered, and very formal in its approach to storytelling. Some of his most popular and acclaimed stories really give weight and meaning to the term graphic novel. Even though I’m not a fan of the term, it serves well enough to distinguish his style of writing from that of his contemporaries. That’s not to say that his writing is better or worse by definition (though it is often better), only that his career has been repeatedly marked with literary ambition and the skills to back that up.

I’m not sure that the same can be said of the science fiction/comedy series co-created with superstar artist Alan Davis. I’m talking, of course, of D.R. & Quinch. Can a humorous series have subtext and follow a formal and structured approach to comic book storytelling? As it turns out, yes. Can it do this while still being funny? Also yes. I admit, I was surprised to discover this and I’ve already read D.R. & Quinch at least once before. Since I’m in the mood for confessions, I’ll add that I didn’t remember much of anything from The Complete D.R. & Quinch other than the main characters were destructive hooligans who once blew up planet Earth for kicks. That happens in the very first story, six pages into this collection. As something so obviously different when compared to the rest of Moore’s body of work, this series deserves mention. It also happens to be good so it also deserves your attention (and probably your money, too).

Waldo “D.R.” (Diminished Responsibility) Dobbs, a thin Skrull-looking alien, and his friend Errol Quinch, a large purple alien, are college students. They inhabit the pages of 2000 AD and you’ll never see them on campus, mostly because their lives revolve around causing as much property damage as possible while having a good time. They had their first adventure as part of Tharg’s Time Twisters, one of 2000 AD’s popular short science fiction stories that often included a twist. In “D.R. and Quinch Have Fun On Earth” the guys travel back to the very dawn of Earth’s prehistory and mess around with the population. The whole affair is a prank orchestrated by D.R and Quinch and it ends with Earth’s total destruction. It used a model of story that the weekly anthology comic was known for at the time but Moore and Davis clearly included something else that made it noteworthy because fans asked for more and a few months later the creators delivered.

Starting with prog 350, Moore and Davis produced several other D.R. and Quinch adventures. The first couple of stories, “D.R. and Quinch Go Straight” and “…Go Girl Crazy”, culminated to what I consider the high point in “D.R. and Quinch Get Drafted”. Their adventures kept going for another two stories, the fan favourite “D.R. and Quinch Go to Hollywood” and “…Get Back to Nature”. Since this collection is called The Complete D.R. and Quinch it also includes the one-page advice column stories written by Jamie Delano and illustrated by Alan Davis and his long-time inker Mark Farmer. Out of all those stories there were a few constants. The first of which was Davis’s excellent art, where his skill with facial expressions and articulated body language served the comic really well. The others were Moore’s wit, and the character’s love of destruction and complete disregard for the safety of others. I’d rather not say more about the story as your enjoyment of them will likely depend on the surprises that Moore peppers throughout, so I’ll move on to what makes them work so well and why this collection makes for a fun read.

Since this was written by Moore, it should come as no surprise that his constant use of structure and his formalist approach to storytelling can be found in this comic. Moore used a few basic comedic techniques that repeat throughout the series. Their only goal is to advance the plot only as far as the next punch line can be found. It makes for a rhythmic and regular pacing which sustains the reader’s enjoyment by providing regular laughs. In a sense, it’s similar to Evan Dorkin’s Milk & Cheese (a series about anthropomorphized milk carton and wedge of cheese) though less angry. It also followed a pretty regular comedic formula and feature very angry and violent main characters. I’m not sure if anybody can write comics as angry as Dorkin’s, but Moore and Davis manage to at least match his and his characters’ love of destruction and their violent energy.

One of the other structural elements in use in D.R. & Quinch is the setup of expectations followed by a humorous reversal as the punch line. This is done mostly by playing with opposites and providing funny contradictions. Often times those contradictions are presented between the narrations and dialogue (the text) and the action (the art). The dialogue and captions by Moore say or present one thing while Davis’s art presents a very different version of what the narration describes. With this kind of technique Moore and Davis are using the reader’s knowledge of D.R. or Quinch’s characters to comment on an event. The caption provides one point of view through the perspective of the character and the image provides the actual events, without the character’s filter. The juxtaposition of both those points of view provides humorous results. With this device Moore often employs hyperbole and that contrasts nicely with Davis’s depiction of the story’s facts. It makes for a good combination of both basic elements of comic books and that’s the driving strength of this series.

Another example of these techniques, particularly juxtaposition of opposites and contradictions, are the presentation of the horrifically violent things that D.R. and Quinch do. Their “pranks” and their carefree approach to it are view very different from the characters’ point of view and that of their unlucky victims. The humour is found when the reader aligns with the main characters’ point of view even though we know that we shouldn’t. They have an innocent, child-like reaction to life around them. They’re clearly emotionally and psychologically unbalanced but that’s one of the things that help sell the humorous aspect of these stories. The technique of showcasing opposites when used in combination with the setup and reversal technique provides numerous jokes in the comic. Exaggeration plays a big role too but the key thing that makes it all work, and work repeatedly, is that Moore often combines these elements together for his jokes. Using these techniques in isolation would certainly provide some laughter but when regularly used in unison, it’s a recipe for success. Davis also contributes a lot to the story’s humour. He has two primary roles. Either he plays the straight man or the imaginative interpreter of Moore’s script, as the story requires. He counterbalances Moore’s rigidity with comedic rules and structure with a fluid, visual energy.

What does all of this have to do with science fiction? Honestly, not much. In my defence, Sequart has yet to have a Comedy Week (though if they did I would certainly write about Dr. Slump by the incomparable Akira Toriyama). Since D.R. and Quinch was published in a science fiction anthology, it’s to be expected that this comedy strip would be set in the future and on some far away planet with nothing but aliens as the cast. In truth, there isn’t much here that wouldn’t work in a non-genre setting. The first story might be the only exception since it involved time travel. The rest though, would work quite nicely with just regular human college students with a penchant for violence.

What really sells this as a science fiction story though is Alan Davis’s art. His character designs are distinctive and memorable. Most of the stories require that he draws many types of aliens along with futuristic looking building and spaceships. He excels at it and it really helps to make this comic an enjoyable read, even 30 years after their first appearance. His line art is clean while still being very expressive. The black and white art never looks muddy and Davis never gets lost in the details. Everything is very clear and that clarity helps the more visual gags land and work as well as intended.  He’s also very good with facial expressions which successfully convey the thoughts and emotions of the characters. The body language on display here is top notch.

All told, this is a strong collection of pretty funny comics. One thing that stands out as particularly impressive is just how much Moore and Davis manage to cram into each of these stories. They’re all really short segments, no more than 6 pages at a time. Yet those pages manage to stand on their own quite well. It’s really nuts to think that the two longest stories are only around 20 pages long, the average length of a single comic book issue. Sure, there isn’t as much depth as you would expect but that doesn’t mean there isn’t any at all. Humour is a great vehicle for satire and parody and you’ll find plenty of that here. The focus though is on the jokes and the creators never lose sight of that.

It might seem odd that Moore wrote a pretty popular and successful comedic series during the 80s when he was also writing some of most thoughtful and audacious comics of that same decade. Unsurprisingly, he does it with as much attention to detail. You only need look at the comic to see that, but if you want more proof this collected edition includes a sample of one of his scripts. It’s as detailed as those for his more serious works. It’s equally surprising to see Alan Davis draw a humour comic. It’s something I wouldn’t have expected from him either. Most of his career is dominated by superhero work. While that kind of comic can have its genuine funny moments, they usually come through in the writing and not the art which focuses on punching and posturing.

Like the best comedy acts, there’s a message hidden in there somewhere. I think it’s that you should never pigeonhole your favourite writers and artists. They might surprise you with a project that seems like something completely out of left field. Heck, I hope they do, because they could create something fun and different than their usual fare. You might get something like D.R. and Quinch out of it.

If you would like to sample one of the D.R. & Quinch stories, you can read the first Time Twisters story that introduces the characters HERE. 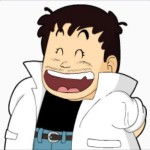