And the Universe so Big: 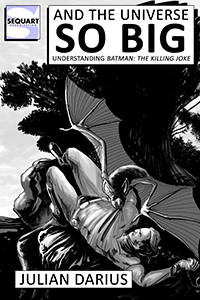 In 1988, Alan Moore and Brian Bolland’s Batman: The Killing Joke offered a violent, literate, and controversial take on the Joker’s origins and his relationship with Batman.

Now, Dr. Julian Darius examines it in the context of the high-art ambitions of 1980s super-hero comics, exposing the narrative’s ambiguities and secrets.