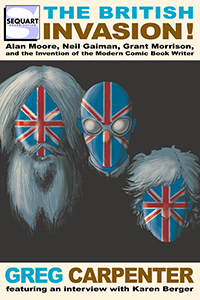 They came from Northampton, West Sussex, and Glasgow, and even though they spoke with different dialects, they gave American comics a new voice — one loud and clear enough to speak to the Postmodern world. Like a triple-helix strand of some advanced form of DNA, their careers have remained irrevocably intertwined. They go together, like Diz, Bird, and Monk… or like Kerouac, Burroughs, and Ginsberg… or like the Beatles, the Stones, and the Who.

Taken individually, their professional histories provide an incomplete picture of the British Invasion, but together they redefined the concept of what it means to be a comic book writer. Collectively, their story becomes the story of mainstream comics in the modern era.

It’s the story you’re about to read.

“So weird to be reading about events one was in the orbit of (and, at times, very close orbit) as they were happening. I can honestly say Greg’s not only done his homework, he’s synthesized it all into a concise, involving, flowing read that’s so true to the experience of those years (1982+) that I’m getting sensory flashbacks at times (sound, smell, taste even) reading this. Greg’s done a magnificent job with this book, making sense of the events, the creative works, the times, and a bit of the business dealings that made it all possible (and, at times, impossible). This book is that good, and that essential. Highly recommended. Kudos to the author and publisher.”

“Carpenter explores, in depth, the key figures in the greatest revolution in the history of comics — essential for the scholar and a joy for the fan!”

Greg Carpenter is a writer, teacher, and recovering coffee addict. He is the author of The British Invasion: Alan Moore, Neil Gaiman, Grant Morrison, and the Invention of the Modern Comic Book Writer. In addition to producing a weekly column for Sequart for almost two years, he has also written for RogerEbert.com and PopMatters. He has published essays on a variety of writers and artists including Moore, Gaiman, Morrison, Jerry Robinson, August Wilson, and Tennessee Williams, and he has taught a wide variety of classes, including Comics, Shakespeare, Modern American Literature, and Screenwriting/Playwriting. He currently teaches at a university in Nashville.