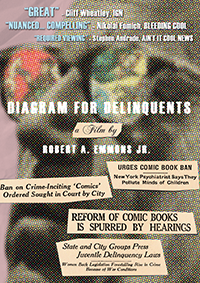 In 1950, America was in a state of panic. Juvenile delinquency was destroying the very fabric of society. Ninety percent of all children were reading comic books. In 1954, psychiatrist Dr. Fredric Wertham wrote a scathing indictment of comics called Seduction of the Innocent. Its central premise: Comic books were the leading contributing factor to juvenile delinquency. That same year, Dr. Wertham testified at special hearings on comic books at the Senate Subcommittee to Investigate Juvenile Delinquency in the United States. Comics were on trial.

Diagram for Delinquents captures the zeitgeist of late 1940s and early 1950s America and investigates how the funny books found themselves on the fire. Using expert and comic book insider interviews, never seen before historical photographs and films, and animation, DIAGRAM goes further than any previous comic book documentary to explore and understand the controversial figure at the center of this American tale: Fredric Wertham.

Bonus material (available on the DVD and in the “download plus”) includes:

Robert A. Emmons Jr. is a documentary filmmaker focusing on American popular culture and history. His films include Enthusiast: The 9th Art, Wolf at the Door, Yardsale!, Goodwill: The Flight of Emilio Carranza, and De Luxe: The Tale of Blue Comet. His Goodwill was screened as part of the Smithsonian exhibition "Our Journeys / Our Stories: Portraits of Latino Achievement," won Best Homegrown Documentary Feature at the 2008 Garden State Film Festival, and led to him receiving Mexico's Lindbergh-Carranza International Goodwill Award as a "Messenger of Peace." From February to August 2010, Emmons created two short documentaries a week; the 52 short documentaries formed the weekly internet series MINICONCEPTDOCS. His print work focusing on electronic media, documentary film, and comic books include Who's Responsible Here? Media, Audience, and Ethics (Cognella, 2009), The Encyclopedia of Documentary Film (Routletdge, 2005), Small Tech: The Culture of Digital Tools (University of Minnesota 2007), and The Encyclopedia of Latino and Latina History (Facts on File, 2010). He teaches film, new media, and comics history at Rutgers University-Camden, where he is also the Associate Director of the Honors College. For more information, visit robertemmons.com.