How to Analyze & Review Comics:

A Handbook on Comics Criticism 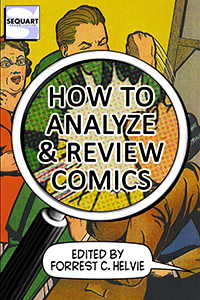 "An invaluable asset to comics reviewers and critics, giving them much-needed context for their writings."
-- Mark Waid

Although comics press and criticism has risen in recent years, the resources available to help inform the discussions on how to talk about comics from a critical perspective remain more limited in nature.

How to Analyze & Review Comics serves as a mainstream-friendly resource for journalists, academics, students, bloggers, and fans of all kinds. Presented in “bite size” articles and interviews focused on all areas of the comics medium, this accessible collection is for anyone who wants to learn more about how to write, discuss, and better understand the medium of comics.

Forrest C. Helvie lives in Connecticut with his wife and two sons where he is chair and professor of developmental English at Norwalk Community College. His literary interests are broad-ranging from medieval Arthurian to 19th-century American, and most importantly, pedagogy, comics studies, and super-heroes. In addition to academic publications, he writes a variety of comic short stories, including his own children’s comic series, Whiz Bang & Amelia the Adventure Bear. He regularly writes for Sequart and reviews comics for Newsarama. Forrest can also be found on Twitter (@forrest_helvie) discussing all things comics related.