The Weirdest Sci-Fi Comic Ever Made: 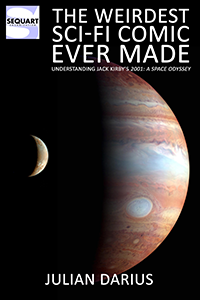 In 1976-1977, comics legend Jack Kirby, known for his bombastic super-heroes, produced an adaptation and continuation of Stanley Kubrick’s cinematic sci-fi masterpiece 2001: A Space Odyssey. One could hardly imagine more celebrated creators in their respective fields — nor a greater clash of personal styles. The result, according to Dr. Julian Darius, was a mad clash of themes and tones that reveals much about Kirby, 2001 itself, and even 2001 novelist Arthur C. Clarke.