"Will surprise even longtime students of the book... admirably ambitious."
-- World Literature Today

It’s 1986. The first issue of Watchmen appears. The comics medium is changed forever.

It’s 2005. Watchmen is selected by Time magazine as one of the 100 Greatest English Language Novels from 1923 to the Present.

It’s 2009. A film adaptation of Watchmen is released.

It’s today. A quarter century since its original publication Watchmen is more popular than ever.

Minutes to Midnight: Twelve Essays on Watchmen examines Watchmen from a variety of perspectives to uncover surprising answers to many questions. What does it reveal about the history of scientific theory? How is the atom bombing of Hiroshima refracted through its pages? Does Watchmen’s murder mystery measure up to the standards of Raymond Chandler? Is the depiction of Rorschach an unfair caricature of the philosophy of Steve Ditko? Where are the secrets of Captain Metropolis and the Minutemen revealed? Was the Comedian right all along? Who shouldn’t read Watchmen? What are the limits of Watchmen and do they extend beyond a major motion picture?

No matter how well you know the story, you’re sure to learn something new about Watchmen here.

This book debuted at the 2010 New York Comic-Con, where it sold out on the first day. 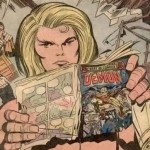