When Ed hears the name of the baby he mistakenly tried to arrest when going after Yolinda Y. Yorty in 1989, he loses his mind and tries to wed his own grandmother, Tuesday, in 1963 (4 – 5). This is another version of the grandfather paradox as a successful marriage would change the time traveler’s lineage and perhaps prevent his own birth. Additionally, this could be seen as a sub-variant of the term “autofanticide” which describes the accidental killing of oneself in the past and was originally coined by the philosopher Paul Horwith (1987: 2).

Furthermore, after Ed’s attempted wedding the reader begins to understand that the aforementioned causal loop is larger than previously suggested. The final panel of the comic shows a close-up of Joe Saturday. Since the story starts with a similar depiction of the character, this can be seen as a visual clue that the story has doubled back on itself, with the hunter now becoming the hunted. This is underlined by Joe Saturday’s face showing his emotions for the first time in this final close-up. As the final captions of Chronocops state that Ed wants to kill his former partner when he gets out of prison four years later, this twist provokes a second reading of the previous pages.

In this several initially overlooked details seem to gain additional meaning. On the first page the black and white stripes of the damaged wall suddenly seem reminiscent of the sleeping man’s pajama. In the second panel a crooked and smashed family-photography is shown behind Ed Thursday, which now appears to point toward the relationship of the two law enforcers and its ensuing disruption. Further, the “Home Sweet Home” sign welcoming the two officers above the bed (1), suggests how the two chronocops apparently are associated with the crime scene. Since Quarmsley Q. Quaalude’s sleeping great grandfather physically resembles Joe Saturday (1) and the futuristic punk is mostly depicted between the two chronocops, both size and position wise (2 & 5), all of these clues seem to add up to Quarmsley Q. Quaalude being the son of Ed Thursday and great grandson of Joe Saturday.

Therefore Ed probably traveled into the future after his release from prison to persuade his descendant to commit the crime. This suggestion is strengthened by the would-be killer’s statement that he only tried to kill his great grandfather after he “got in with the wrong crowd” (2). Even Joe’s question, “Who knows why [kids] do the crazy things they do?” (2) becomes more ominous with the additional information gained on the following pages.

A further confirmation of this interpretation might be found in the alarm clock on the bedside table which reads “MAR 10, 1968” (1). The importance of this date is highlighted by Joe’ repetition of it on identical panels (2 & 5). It would suit the four-year time slot between Ed’s failed attempt at marrying Tuesday and his planned release from prison (5), when a few months of courtship and honeymooning are added to the calculation.

However, this seems to be contradicted by the newspaper lying beside Joe on the penultimate panel. Its headline reads “Rhode…” and on a second line “U.D.I D…” (5). This probably refers to the unilateral declaration of independence by Rhodesia, today’s Zimbabwe, on November 11, 1965. However, demands for a U.D.I. had arisen in Rhodesia several years earlier (Wood 2005: 15 – 16). The ongoing debate between 1956 and 1965 therefore prevents the newspaper from being an reliable aid in dating the final scenes in Chronocops.

Contrarily, if the newspaper is used to date the comic’s final scenes to November 1965 in spite of that, it would have to be considered as a final gag at the expense of the chronocops. This reading suggests that Ed sent Quarmsley Q. Quaalude to kill his former partner before his own release, so that both his own warning and Joe’s realization of the threat (5) occurred too late. Time traveling would therefore prevent the watchman of time traveling from watching out for himself. This would also suit the opening scenes of the comic better, in which Ed’s plan fails anyway, due to his own previous intervention.

The officer’s initially unrecognizable involvement in the first crime depicted in the comic is further confirmed by the names of the characters. At first they seem to be another wordplay, similar to the punk not wanting to do time (2), and a simple parody on Joe Friday, Dragnet’s Detective Sergeant. However, Thursday is exactly two days before Saturday and two days after Tuesday. This indicates Ed’s role as son of the two other protagonists once more.

Additionally, the switch of the main character’s name to the only weekday still named in the Greco-roman tradition and not the later Germanic fashion is telling. In Roman mythology Saturn, the Greek Kronos and eponym of Saturday or “dies Saturni”, was the leader of the first generation of titans. Responding to a prophecy, that he would be overcome by his own children, as he had once dispatched his own father, Uranus, Saturn swallowed all of his children after their birth. However, his youngest son Jupiter, Zeus in Greek, was saved by his mother and later fulfilled the prophecy by overthrowing his father. The link between the mythical father of the Olympian gods and the comic’s main character gets highlighted in Chronocops as a bus that is clearly labeled “Titan” is shown following Joe (4). Furthermore, the names of the other characters back this interpretation. “Dies Jovis”, the weekday dedicated to Jupiter in the Roman calendar is what we now call Thursday. In Latin Tuesday is named “Dies Martis”, the day dedicated to Mars, the Roman god of war. Thus the names given to the characters in Chronocops refer to this mythological background and anticipate Ed’s plan to kill Joe, with his grandmother symbolizing their conflict.

This upcoming dispute also is alluded to by the officers’ diversion of the traffic. Just after Zanzibar Z. Ziggurat’s surprise attack on Ed Thursday, which was the cause of their estrangement, they redirected the time routes from 1997 through 1645 (3), a year at the height of the English Civil War.

Marv Wednesday, whose surname probably refers to the Germanic trickster-god Wodan, appropriately works for the fraud division. Since he features in the panel on page three where the chronocops eat a sundae, his name can also be seen as the culmination of the weekday-pun. This would run in tune with the different menus on display in the background, which mostly seem to be gags with no further meaning to the plot, although some intertextual references are made.

The names of the other side-characters seem to have nothing to do with the comic’s plot, however. Quaalude is a potent sedative that was banned in the year Chronocops appeared. This might suggest a link to the sleeping man on the first page of the comic, allude to the deviant punk or refer to contemporary news. Although the drug’s name is a further time-pun, as it is derived from the term “quiet interlude”, it does not seem to have any other meaning for the story. Since Zanzibar Z. Ziggurat’s surname at best refers to an ancient Mesopotamian pyramid and Yolinda Y. Yorty’s to a former notorious mayor of Los Angeles, they seem to be solely chosen for their absurdity which is highlighted by the choice of the rare initials Q, Y and Z. Their names are easily distinguished as they include funny alliterations and their exotic nature gives them a slightly futuristic appeal.

Additionally, the onomatopoeic snoring noises on the comic’s first two pages now seem to allude to the man who causes Ed to initiate the crime prevented in the same panels. Given the amount of references included in other details of Chronocops and later collaborations between Moore and Gibbons, the exact number of three “Z”s, as in the initials of Zanzibar Z. Ziggurat, hardly is coincidental. 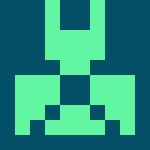