Forgotten Father of the Sci-Fi Franchise

Flash Gordon, Buck Rogers, Luke Skywalker, the Doctor, Captain James Tiberius Kirk, Captain Video… What do those names have in common? If you said they are protagonists that launched science fiction franchises you’d be correct, dear reader. What’s that? You never heard of Captain Video? Star Wars, Star Trek and Doctor Who are juggernauts of the genre. However, Captain Video paved the way for them all. His adventures, unlike many featuring Buck Rogers and Flash Gordon, who predate Captain Video, have gotten lost in the timestream, but elements that have become common place in sci-fi film and television were born when they initially launched into the airwaves in 1949.

The Golden Age of Television brought many new and experimental shows and genres throughout its fledgling years. Among those who pioneered the medium was DuMont Laboratories, a manufacturer of television sets, and their DuMont Network. Beginning operations in 1946, the DuMont Network, while perhaps the laboratories’ idea to sell TVs to the public, gave audiences such programs as The Ernie Kovacs Show and Cavalcade of Stars. The latter comedy variety program introduced viewers to The Honeymooners starring Jackie Gleason and Art Carney. In one famous bit, Gleason’s Ralph Kramden and Carney’s Ed Norton characters buy a television on which Norton hilariously watches the first science fiction/space opera series to have its beginnings on the small screen, Captain Video and His Video Rangers.

Set in the year 2254, Captain Video and His Video Rangers told of the title characters defending the universe from various nefarious ne’er-do-wells across space and time. Captain Video was played by character actor Richard Coogan in the series’ first season, with radio’s Green Hornet, Al Hodge, taking over the role from the second year onward. Like Batman, Captain Video had a young sidekick. This lad only went by the name Video Ranger or Ranger. He was played throughout the Captain Video‘s entire run by Don Hastings, who was already a television veteran at the tender age of fifteen. Don’s brother Bob, best known to 1990s nostalgia buff as the voice of Commissioner Gordon on Batman: The Animated Series, made his TV acting debut on Captain Video as Ranger Hal.

Created by DuMont’s “Idea Man” Larry Menkin, Captain Video and His Video Rangers launched into the television cosmos on June 27, 1949. The series predates its competitors Space Patrol and Tom Corbett, Space Cadet which aired on March 9, 1950 and October 2, 1950 respectively on rival networks. Being the first science fiction television program on live television at the time made Captain Video difficult to produce in an era that predated CGI by decades. The special effects were done on a shoestring budget, and many of those and the props were purchased in Wanamaker’s Department Store downstairs from the sound stage where the series was rehearsed and filmed, with costumes consisting of Army Surplus uniforms with lightning bolts sewn onto them. It’s been said it cost $25 per episode to do the show. That was a lot of money at the time, but it wasn’t nearly enough for an ambitious space saga for the small screen. This is also among the reasons footage from western movie serials would be used as breaks in the stories. These would be called transmissions from Captain Video’s agents on Earth. Plus, westerns were popular at the time.

Some of science fiction’s most famous writers took part in Captain Video and His Video Rangers. James Blish, scribe of most of the novelizations of Star Trek: The Original Series episodes, Foundation and I, Robot creator Isaac Asimov and Arthur C. Clarke, famous for 2001: A Space Odyssey, are among those who penned episodes of the series. Clarke even wrote the short story “Arms Race”, which was based on his time on Captain Video. Many scripts in the show have been said to display an intelligence later shown in such television gems as The Twilight Zone and various outings in the Star Trek franchise.

You’re probably wondering how Captain Video and His Video Rangers could be described to the new generation of science fiction fans. Perhaps the best way to do so is to compare the title characters to something more familiar in this day and age. Captain Video was the leader of the Video Rangers, a group of intergalactic police like Marvel’s Nova Corps or DC’s Green Lantern Corps. They traveled the universe to defend it against numerous nefarious rogues, particularly the evil Doctor Pauli, played by Bram Nossen and Hal Conklin, in early episodes. The latter actor’s portrayal of the villain was so convincing to young viewers of the period, rocks were thrown at him on his way home from the studio. That really shows how powerful television was in the 1950s.

Doctor Pauli isn’t the only character to be played by two different actors. Captain Video himself was portrayed by character actor Richard Coogan in the first season of the series. He was replaced by radio’s Green Hornet Al Hodge in the second second. This most likely due to the fact Coogan would break character during filming. Hodge, however, would forever be associated with Captain Video until his death in 1979, having played the space adventurer in Wonderama and as the host of Captain Video’s Cartoons, shows that were only broadcast in the New York area. He even told reporters as late as 1978 that he was most recognized as Captain Video.

While Star Wars, Star Trek and Doctor Who have become giants in science fiction franchises, Captain Video and His Video Rangers paved the way for those franchises, having spawned merchandising and spin-off series. Among the latter were the aforementioned  Wonderama and Captain Video’s Cartoons as well as 1953′s The Secret Files Of Captain Video and 1957′s Here Comes TOBOR pilot featuring a robotic foe of Captain Video. In fact, TOBOR is “ROBOT” spelled backwards.

1951 saw Captain Video go to the big screen in one of the last movie serials to be brought to American movie houses, Captain Video, Master of the Stratosphere. It starred Judd Holdren as the title character and Larry Stewart as Video Ranger. Producer/director Spencer Gordon Bennett and writer Royal K. Cole, who had collaborated on serials based on DC Comics’ Blackhawk, Superman and Batman, brought the fifteen chapter arc that took place on the planet Atoma, where the title character battled Vultura. The entire saga had a much larger budget than the television series that spawned it and was described by Donald F. Glut, author of the novelization for Star Wars Episode V: The Empire Strikes Back, and film historian Jim Harmon in The Great Movie Serials: Their Sound and Fury as a “rather shoddy, low budget space cliffhanger.”

Toys, games, and puzzle were just a few of the gadgets and collectibles made when merchandising, which is more common nowadays, came to be for Captain Video. Fawcett Publications, who were responsible for comic books the Captain Marvel and Marvel Family from Shazam! before DC Comics bought the characters, even put out a bi-monthly Captain Video comic book. It ran for only six issues that were cover dated February 1951-December 1951. Captain Video wasn’t the first licensed comic ever published. In fact, Fawcett published an adaptation of the Captain Midnight radio serial. Yet. Captain Video is among the first based on a property that began on television.

Many of those who worked on the Captain Video comic book went uncredited. However, Roy Ald edited and, according Shaun Clancy’s interview with Ald in Alter Ego #104-108, scripted some Captain Video tales. Otto Binder, best known for his creation of various characters in Shazam! and his collaborations with Al Plastino on various Superman related books, wrote two page science fiction text pieces. Star Wars artist Al  Williamson and Martin Thall inked it while George Evans drew the good captain’s four-color adventures. Evans’ art graced many EC Comics and Fawcett titles throughout the 1950s. Evans even provided new material for AC Comics’ reprints of Captain Video in 1990′s Thrilling Science Fiction Tales #2. The title character is renamed Videxx for reasons that are presently unknown.

Like its TV father, Captain Video also featured a western. In this case Fawcett put Rod Cameron comics in Video’s pages. However, unlike the series, much of the comic book sagas are more Earth bound in the year 1951. On television, Captain Video is called the Master of Time and Space. Both mediums versions of the character have told their share of classic, high quality tales from the Golden Age.

Fawcett’s Captain Video ended with issue #6. However, the comic’s legacy lives on thanks to its influence on writer Roy Thomas’ work at Marvel. The story “The Indestructible Antagonist” inspired the creation of of the indestructible (a nod to the title) Adamantium that Ultron was made of. Ultron itself looks similar to the robot in “Antagonist”. This combined with DVDs of four public domain television episodes and the movie serial, an unpublished script for a revival comic book and all of the genre giants who owe their creation to Captain Video and His Video Rangers and its influence on a generation, show that the forgotten father of the science fiction franchise will always have a place in fans’ hearts. 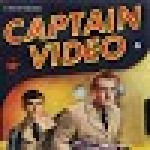