I have had a few conversations about the work of Garth Ennis over the years, and have concluded that his work (and indeed, he himself) is misinterpreted or misunderstood by the average comic consumer. By misinterpreted, I mean that his work is often seen only as crude and full of juvenile masculinity, that his comics lack properness to their storytelling. Or at the very least, the crudeness gets highlighted more than the rest of what is going on in the pages. By misunderstood, I refer to the perception of the purpose for these sorts of narrative elements and how one perceives them to have little or no meaning or that his stories that often include these elements have little else to offer. Perhaps Ennis creates this opinion of his work due to the content of his stories, but it becomes an easy popular opinion due to its relative extremity. Ennis is not a one-trick pony, though. His comics are never as simple as a face-value reading would suggest. His work is constantly surprising to me because as crude as he can be, he is also wonderfully poetic and powerfully heartbreaking in a way that I do not see with other writers.

Part of this constant personal surprise over his work is the way in which Ennis is able to negotiate his storytelling between diegetic and extradiegetic narrative spaces in the comic. In a comic, a diegetic space is the world within the comic itself – the characters, places, environments, and actions – basically, the stuff happening in the comic as if it were its own reality, not a story on page. The extradiegetic space refers to the way in which the comic is constructed – word bubbles, panels, the “gutter” separation of panels, and the way the page is set up. For example, in film, it is the difference of hearing a song being played on a car’s radio as it drives by the camera versus a song being played over top of the film as a part of its score. Comics balance story telling between these two narrative spaces. One should analyze both of these spaces as independent narrative elements as well as how they relate to each other in an overall meaning. Ennis’s use and understanding of these spaces is beautifully subtle. We forget that there is any other reality other than the one constructed in the pages of Ennis’s stories. The extradiegetic space is almost not there, it is simply the world of the comic. Until, of course, Ennis wants to make it apparent to the reader.

This is the last page of Punisher MAX #19, originally published in June of 2005 and is maybe my favorite page in comic book history. At the very least, this one page has had more emotional impact on me as a reader than any other page from any comic. Every time I re-read this story (or even just stumble upon the page out of context online) I get a cold shiver down my skin. The punch from this single page is profound, grave and instantly identifiable. We see the expression on Frank Castle’s face, carved into the stone that is his face, and it is not exasperation or any sort of cliché gasp of horror, but the same scowl that Frank has on every panel. Though this single expression is a constant, it becomes instantly different and important than in any other panel.

The abyss of the background is intense. Frank’s reality is impenetrable blackness. Nothingness. Even as he sits in this working-stiff diner, cutting his steak, the world around him is an abyss. It is impenetrable, both diegetically and extradiegetically. We see on the previous page where there is a television newscast telling a story of a vile act of revenge against The Punisher, it fills up the entire diner and everyone is watching the television.

There is a whisper of conversation that rolls over the diner, and people look at each other in disgust, wondering how The Punisher will react. Little do they know that he is in the room, sitting at the counter. The page subtly switches what it is showing the reader. It is no longer diegetic space (the wall of a diner), it becomes extradiegetic space, a physical visual expression of emotion. This space is impenetrable, the reality of the comic cannot cross into it – none of the speech bubbles are on that page. The reader can no longer read the television in the background. The world ceases to exist.

This is the life of Frank Castle. He does not match the diegetic space in Punisher MAX. His every day is the infinite nothing that surrounds him. There is no enjoyment here. He eats his meal because it is there, easy and low-key. Nothing in his life is enjoyed. It cannot be. After witnessing the desecration of his family’s grave, the reader becomes aware of the illusion of cold pounding rain on his body through the lines on the panel’s background. This infiltrates the void that is Frank’s life. The bleakness of his reality is worsened, made even more absolute and further separates him from the reality of the people around him. When it rains, it rains alone on him. When every day is your lowest, you realize you can be broken further. The space around him switches from the diegetic world of the diner and its tired wallpaper and the reflection of the TV’s glow and changes into pure extradiegetic space. It is blackness eternal around Frank as opposed to the reality of the comic, and it is now even worse.

Rain or maybe claw marks – the scratching of a long buried thought or memory clawing at the everything/nothing that is your life with long, violent streaks down the panel itself. The anger that is inside Frank is not stored in the diegetic space – within Frank’s mind, or expressed in his actions, but in the extradiegetic – scarred physically on the page. The art on page becomes literal narrative rain, narrative scaring, narrative misery in a way that no words or description could ever match.

The event is so powerful that the comic itself, the story, feels what is happening within; it becomes aware in a way that text on paper can never be, changing the world around the character for the reader. 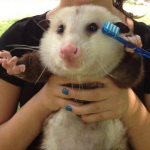