Yeah, But Can You Draw?

I realized after publishing my last column that I forgot to mention one minor element that is crucial to actually making something of oneself in the comic business. You actually have to be able to produce decent work. At the time, it seemed so obvious that it need not be spoken (or typed, as the case may be), but after some thought on the subject, and after realizing that I see so many hopeless cases posting their artwork on “teh internets” for everyone to see and mock, I decided it had to be stated very clearly. Learn how to draw.

Now, I’m not talking about artists who are genuinely still learning, and post their artwork on websites or art groups in order to get critiques. I actually think that is a valuable way to gain knowledge, if only to a certain degree. I’m speaking more of the terrible webcomics that read like Penny Arcade if it was written and drawn by a monkey. But even on sites that welcome critiques from its users, the schmoe critiquing your work usually can barely hold a pencil, and his/her art knowledge usually extends about as far as last week’s issue of Tights-Man (to use an old cliché, opinions are like assholes; everybody has one, and they all stink). But that’s okay, because I’m here to help.

The first and most important thing you need in order to be a Comic Book Artist (or any artist, for that matter) is imagination. If you don’t have any, neither I nor anyone else in the world can help you. Go home and become a corporate executive.

The second thing you need is talent. I don’t give a (-insert colorful expletive here-) how hard you work, or for how long you’ve trained, if you don’t have any natural talent, you will suck. And suck terribly. Now don’t get me wrong; you don’t have to have a LOT of talent – maybe just an eency bit in your left pinky there – but you have to have some. There are a lot of “artists” out there who have none, some of them professionals (even comics superstars) who will remain nameless here (although if you meet me in person, I’ll be glad to drop names off the record).

One of the most important (yet most underrated in my opinion) things you absolutely need is legitimate training. I’m not just talking about practicing what you know, which is also important, but rather having someone with experience looking over your shoulder to tell you that you suck and push you to do better. Unless you have someone to teach you how to craft a piece of art, you will wither and die as a creator. I can not stress this enough. I troll the internet for hours on end looking for new and interesting art and artists, and mostly I find people with a lot of style and no grasp of the fundamentals of drawing. And it looks bad. Learn perspective, learn anatomy, and take life drawing classes. Learn it and apply it. It doesn’t happen overnight; nowhere near it. I’ve been drawing for almost all of my twenty-seven (soon to be twenty-eight) years, I’ve taken many art classes and courses for fifteen out of the last twenty, and I still learn more every day. If you can’t afford to take art classes, go to your local library and take out some books, or go to an online site like Penciljack.com.

One huge mistake that most, if not all, budding comic artists make is to learn from other comics. This is the last thing you want to do if you’re just starting to learn (or even if you’ve been doing this stuff forever). I try to avoid it most of the time, even today, although I find that every comic I look at influences me in some way. Instead go to a museum and look at fine art, especially Renaissance painters; they were the illustrators of their day. For good male anatomy look at Michelangelo’s statues (not for women, though; his women look like dudes with implants. Yeah I said it, and you know I’m right). For good ink line technique, look at Aubrey Beardsley. For action and movement study Jackson Pollack paintings (but only if you can see them in person; the movement is completely lost in 4-color reproductions). Look at the world around you; draw from life. If you’re limited to just comics, you’re doing yourself a great disservice.

Learning, however, is a lost cause if you don’t know how to apply your knowledge. This is actually the single hardest thing to learn, and near-impossible to teach. You have to figure it out for yourself. I see many, many artists in the mainstream who don’t know how to draw, but do, and many in indie artists who do know how to draw, but don’t. An equal number of each exists on both sides of the divide, certainly, but it’s easier for those in the mainstream to hide behind things like over-rendered color, and likewise for those in the indie world to try and conform to the prevailing minimalist aesthetic. This works for some, but for others it’s doing a disservice to themselves and to their readers.

I believe that an artist has to learn their craft, and they have an obligation to work to the best of their ability as often as possible. Many indie artists seemingly eschew learning traditional craft at all, seeking rather to experiment than to present a clear, clean story and be perceived as “boring”. Similarly, many mainstream artists learn only established craft and apply it, creating overall clarity, but leading to many comics looking cookie-cutter. There is a middle ground somewhere, and I think finding that place is a noble goal indeed. Someday we’ll get there, but it will take an overall strengthening of industry sales to allow us to really flex our creative muscles.

As a good example of said “middle-ground” we can look in particular at the EC comics of the Fifties, where some of the greatest artists ever to grace the medium made their mark. I plan to devote an entire column (or five) to a dissection of the EC artists alone, so I won’t go into too much detail here. I will say that EC artists were paid a slightly lower page rate than artists at some other houses, but they had a tremendous amount of creative freedom, especially for the time period. (See my last column for my “zeroes in the check vs. creative freedom” theory.) Each artist had their own individual style, which certainly contributed (at least partially) to EC’s reported million-plus circulation, and Bill Gaines and Al Feldstein were visionary enough to foster that creativity in their artists.

for details. I think that this also stifled the creativity of the artists to some degree, being that it limited comics to essentially only one genre (superheroes), although within the superhero genre, there are many artists who flourished. Kirby became the standard by which all other superhero artists are judged, and he remains so to this day; Neal Adams and Jim Steranko created the standard for panel layout, design and storytelling; Frank Miller has done too many inventive things to list in the last twenty years alone.

I worry that due to the domination of animation techniques (keeping things “on-model”), the emphasis on clean linework, the hard, digital computer coloring, and the prominence of writers over artists in mainstream comics now, we risk falling into a stylistic rut. I’ve been rereading the Moore/Bissette/Totleben/Wood Swamp Thing run recently, and as I look over the artwork, it occurs to me that art of that type would never fly in this age of mainstream comics. The figures are sometimes malproportioned, the layouts are very illustrative and the rendering is scratchy and hatchy. The coloring is simple flat color benday dots over the lines. But it’s beautiful. It’s not over-rendered, the characters move like they’re alive, the panels are splayed out all over the page (if there are panel borders at all!), and it perfectly suits the mood and tone of the book. It’s a masterful juxtaposition of words and pictures, neither one overpowering the other.

There are a few artists who really push the boundaries in the mainstream these days (sadly, Seth Fisher, one of the most interesting, passed away a few weeks ago; he will be sorely missed). We should all be striving for that interesting twist, that great new look that sets us apart, and yet still exhibits a mastery of traditional principles of design. The only way to do that is through imagination, training and practice. Now go away and pick up your pencils. 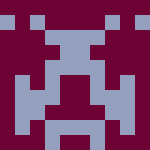