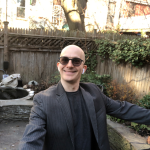 Geoff Klock has a doctorate from Oxford. He wrote How to Read Superhero Comics and Why in 2002 and he wrote another book that no one read cause it was a 100K-word study of seven poems and was only available in a ferociously expensive hardcover. He spoke about Fashion and Superheroes at the Met, got a grant to study Kill Bill, and made a Hamlet super-cut that got like 38,000 views on YouTube, which is a lot for a 15-minute video about Shakespeare. He rides a fixed gear bicycle to the Borough of Manhattan Community College. He teaches composition, old school British literature, and film. His arm has a titanium plate in it. One time he was in the circus, and another time he was in a play with Christopher Lloyd, and once he was in a conga line with Rebekah del Rio. He is pretty good at Twitter and Facebook and Tumblr?

BOOKS AND MOVIES BY GEOFF KLOCK 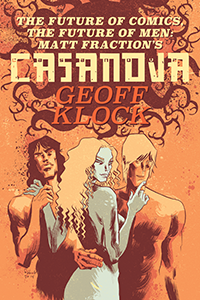 This year I wrote a book, published by Sequart, called The Future of Comics, The Future of Men: Matt Fraction’s Casanova. That book argues that Fraction’s science-fiction spy series offers both a critique of capitalism,… [more]