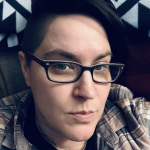 Hannah Means-Shannon is a comics scholar, medievalist, and the Editor-in-Chief of BleedingCool.com. She has published articles on the works of Alan Moore, Neil Gaiman, and Grant Morrison in the International Journal of Comic Art, Studies in Comics, the Journal of Graphic Novels and Comics, reference books, and upcoming essay collections. She is working on her first book for Sequart Organization about Alan Moore. She is @HannahMenzies on Twitter.

BOOKS AND MOVIES BY HANNAH MEANS-SHANNON

Neil Gaiman, like Alan Moore, is someone working in comics who seems to need no introduction. Their influence and impact is so pervasive that they’ve practically become a household name. But there’s a danger to… [more]

Allow me to introduce you to a man you may have met before through his writing, art, or interviews.

IDW’s comic series “Prisoners of Time”, celebrating the 50th anniversary of the Doctor, is a twelve-parter devised with an overarching plot to hold the tales of each respective regeneration of the Doctor in tandem. Meanwhile,… [more]

Neil Gaiman: The Early Years, The Magician’s Choice in The Books of Magic

The Books of Magic was published from 1990-1991, at a time when Sandman was underway and gathering steam but the Vertigo universe was still forming, and demarcations between Vertigo and the DC Universe had not… [more]

Continued from part 1. In the introduction to the first collected edition of Black Orchid, Neil Gaiman wrote, “I know that some people regard this writing as escapist fiction, but I think that tales of… [more]

Meet the Magus 10, The Magus in Time: From Hell Part II

Alan Moore is still better known for his super-hero work than for his esoterically themed or experimental genre-breakers, but this may not always be the case.

Meet the Magus 9, Gods and Demons: From Hell Part I

In subject matter, history, and art style, From Hell stands apart from other works written by Alan Moore, but that hasn’t made it obscure, rather notorious.

Meet the Magus, Part 8: Transforming Perception in Another Suburban Romance

Quite a few of Moore’s works don’t merely feature transformative themes but display a capacity for transformation themselves. By taking on new forms, they lead what could be described as parallel or alternate lives.

Meet the Magus, Part 7: Dualism and the Dark Side in Batman: The Killing Joke

For fans, many of the works that Alan Moore produced for DC carry the shadow of later acrimony between the author and publisher

Meet the Magus, Part 6: A World Inside, Outside in Alan Moore and Oscar Zarate’s A Small Killing

Three years before Alan Moore announced his decision to become a magician and roughly four years before the performance event of The Birth Caul, he collaborated with Oscar Zarate on an unusual graphic novel.

Meet the Magus, Part 5: Microcosm, Macrocosm, and Magic in V for Vendetta

V for Vendetta may well be Alan Moore’s most politically concerned work, and its sci-fi dystopian vision has a decidedly practical edge.

Meet the Magus, Part 4: Phantasmagoria and the Occult in Saga of the Swamp Thing

Meet the Magus, Part 3: The Deep Green, Jack of the Green, and the Swamp Thing

Ten years before Alan Moore informed friends and family that he would be pursuing the path of a practicing magician, he began working for the megalithic American comics company DC on the production of The… [more]

Meet the Magus, Part 2: The Universal Dance in Alan Moore and Eddie Campbell’s Snakes and Ladders

When we discuss the relationship between Alan Moore’s artistic works and magic, clearly marked boundaries become, instead, borderlands of relationship.