Paul R Jaissle is a philosophy professor, collage artist, and musician who writes about film and comic book theory and blogs for destroythecyb.org. He earned his MA in philosophy and art from Stony Brook University, and currently lives in Grand Rapids, MI. You can follow him at paulrjaissle.tumblr.com and @ohhipaulie on Twitter.

BOOKS AND MOVIES BY PAUL JAISSLE 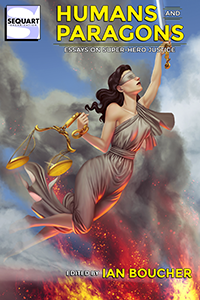 Up Front: How Bill Mauldin’s Cartoons Captured the Truth of WWII

Although the name usually implies humor, cartoons don’t always have to be funny. In fact, like any other artistic medium, cartoons can –and should– express the entire range of emotions, and just maybe they can… [more]

There’s Always Music in the Air: Pure Experience and the Philosophical Appeal of Twin Peaks

The recent announcement –following some cryptic tweets– that Mark Frost and David Lynch will be resurrecting their cult TV hit Twin Peaks predictably caused a firestorm of speculation and excitement. The vocal enthusiasm about the… [more]

“The Wholeness That’s Way Too Big”: Imagining the Sublime With Kant, Derrida, and Jack Kirby

Since I earned my master’s degree in art and philosophy, it may be unsurprising that two of the most dog-eared books on my shelf are Immanuel Kant’s Critique of Judgment and The Truth in Painting… [more]

Eternal Return: The Enduring, and Problematic, Influence of The Dark Knight Returns

When the Man of Steel sequel was officially announced at Comic-Con back in July of 2013, director Zack Snyder claimed that the film would be “inspired” by Frank Miller’s classic Dark Knight Returns. Even though… [more]

DC Comics’ Showcase #4, cover dated October 1956, is usually recognized as the book that launched the so-called Silver Age of comics by reintroducing the Flash and effectively reviving the superhero genre. The iconic cover… [more]

Return to Me: The Experience of Memory in Jaime Hernandez’s The Love Bunglers

SPOILERS BELOW… There is a stunning sequence in part five of Jaime Hernandez’s The Love Bunglers — originally serialized in Love and Rockets: New Stories volumes 3 and 4, and recently released in a deluxe… [more]

It was clear from his first appearance in 1962’s Amazing Fantasy #15 that Spider-Man was a very different character than any of the other super-heroes battling for justice on the newsstands at the time. Unlike… [more]

Great Books vs. Late Books: Should Marvel Switch to a Bi-Monthly Schedule?

When you picked up Hawkeye #16 in late January, you might have been wondering what happened to issue #15. Well, it turns out that #15, originally solicited for September, is finally scheduled to arrive in stores February… [more]

Image Expo and the Changing Value of the Creator

Among with the flurry of new series announced at this year’s Image Expo was the news that Ed Brubaker and Sean Phillips (Criminal, Incognito, Fatale) had signed a five-year deal with the publisher that effectively… [more]

Phony Beatlemania: Zombies, Nostalgia, and Satire in Al Ewing and Henry Flint’s Zombo: You Smell of Crime and I’m the Deodorant

As originally reported by Bleeding Cool, Billy Hynes, a former employee of London’s Gosh Comics, tweeted a photo on Sunday that appeared to be a page of original art from Alan Moore and Brian Bolland’s… [more]