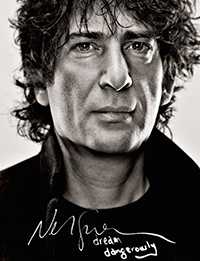 Collider calls it “a documentary chock full of fascinating insight into the creation of some of the author’s timeless works… A-” and The Seattle Times calls it a “warmly revealing documentary.”

While working on Grant Morrison: Talking With Gods and Warren Ellis: Captured Ghosts, Sequart and Respect Films were cooking up another film, one that would take a few years to come to fruition. And now it’s almost ready to be released to the world: Neil Gaiman: Dream Dangerously. Thanks to the diligent work of producers Mike Phillips and Julian Darius, Neil Gaiman offered unprecedented access to filmmakers Patrick Meaney and Jordan Rennert on his final signing tour (the largest signing tour in history) and Neil’s farewell to life as a public figure before returning to writing full time.

Dream Dangerously offers viewers a fly-on-the-wall look at Neil on the road, interacting with fans and experiencing the struggles and joys of being an acclaimed public speaker and in-demand personality. At the same time, the film delves deeply into Neil’s writing process, exploring the childhood origins of his love of mythology, up to his struggles to keep his writing fresh after 25 years of successful storytelling.

The film includes unique interviews with Amanda Palmer, George RR Martin, Grant Morrison, Bill Hader, Michael Sheen, Kirsten Vangsness, Lenny Henry, Will Wheaton and many more key figures in Neil’s creative and personal life. Ultimately this is a portrait of one of our most beloved fantasy writers that shows the way that fantasy can be a mirror for the world around us, and for the writer himself.

The film will be released in July 2016. Unseen Films calls it “One of the finest films on creation that I’d ever seen… One of the very best films of 2016.”