A Look at the Brazilian Comic Dora

Dora, by Brazilian wonder Bianca Pinheiro, is not yet available in English  (if Pinheiro keeps growing, in about 15 years Fantagraphics or Drawn & Quarterly will print it in a big book called “Bianca Pinheiro: The Early Years”). It is kind of pointless to review a book most of my readers won’t be able to read (but it’s also liberating: there are spoilers galore, I doubt you’ll remember them in 15 years), so I’ll try to soften the blow by recommending her ongoing webcomic: Bear (https://tapastic.com/episode/37941), which is available in English. It is a true all-ages comic about a girl (Raven) and a bear (Dimas) looking for her parents. If you have kids, you can read it with them, and if you don’t, you can read it anyway and still be charmed. If you want one quick look to know if it is for you, try this already classic page (all you need to know is that Raven and Dimas met an oracle – Bianca, of course – who has all the answers in her storyboard book): https://tapastic.com/episode/46001

I’ve said that parents and kids should read Bear together, and the relationship between a Mother and her Daughter is at the heart of another early project by Pinheiro: Dora (her first original graphic novel, independently published in 2014 and recently rereleased by a proper publisher). But Dora is a completely different beast: it is a horror comic.

Most reviewers insist on calling the Daughter Dora, but she’s never called by any name in the comic (even if Mother says, once: “she has a name”). She’s called daughter, she, girl, witch and monster. I’ll call her Daughter (occasionally, she), because I’m nice and as far as I’m concerned Dora may very well be the Mother (but I’ll call her Mother). Maybe Pinheiro is simply playing with the words “dor” (Portuguese for “pain”; “a dor” meaning “the pain”) or “adora” (“adores”). Anyway, Daughter was always special. She never cried and never spoke a word. Now she’s a teenager, and missing, and Mother tells her story to a Police Detective. 15 people are dead and the Detective (and everybody else) believes that Daughter is responsible.

Daughter is creepy, with her hikimayu (dot eyebrows) and neutral expression. The only one who tries to reach her is Mother. Doctors and teachers don’t bother, nannies are scared, kids won’t get near her. On her first birthday party, she already has a reputation, but the neighbors attend it because they are curious about her. “I wanna take a good look of that girl”, says one of them. And, when a neighbor asks her if she doesn’t fear putting her son’s life in danger, she answers: “She’s turning one! What can she do? Bite us with her gums?” No, but there’s a big fire and her kid dies.

This kind of weird stuff happens all the time around Daughter. They happen so often that it becomes clear that she has some kind of mental powers, which are never really explained because Daughter has no Xavier so she neither understands nor controls them.

And this is what makes Dora so interesting. No, not the powers! But how Pinheiro leaves everything deliberately vague. Take the following sequence (sorry for the quality of the images; internet is useless). All you need to know is that she’s taking a test, every other student has already finished it and she hasn’t even started. Time is running out and her teacher tries to push her:

Pinheiro doesn’t tell us that Daughter got all answers right (the sentence you can’t read is not about that), although of course she did. First, it had already been established that she was a good student. Second, and more important, it was also established that Daughter was creepy, and the only way she can be creepy here is if she gets the answers right. If not, she’s just being an annoying teenager and there’s nothing creepy about that. Any words (even a panel with an A on the test) would be superfluous.

Dora is pure suggestion and atmosphere, and that’s how horror comics work best (scares and splatter simply work better on film). I’ve said it earlier that most readers simply assume that Daughter is Dora, and that’s never stated. It makes sense to think so, the title is Dora, it is Daughter’s face we see on the cover, and this is her story. But, of course, a name on the title doesn’t necessarily mean that it is the name of the protagonist (Rebecca and Ulysses are obvious examples). We read Dora, follow the suggestions and make assumptions (Dora is a mutant who kills people when she gets angry), but these assumptions are never confirmed, so… What if we’re wrong? Take this page (by the way, that’s Dimas on her shirt):

It is absolutely possible, of course, that the blonde girl simply stopped the tricycle because she didn’t want to hit Daughter. She seems like a nice kid, and why would she want to hit another girl? Where are her feet? I don’t know. But does anyone read this page in any other way but that Daughter made the tricycle to abruptly stop? Again, Daughter is creepy; of course she’s doing this stuff. But all we know for sure is that Daughter looks at the girl. Who can say that the blonde girl wasn’t already afraid of Daughter (thanks to her undeserved reputation around the neighborhood), stopped the tricycle herself and ran to her mommy once Daughter looked at her?

Now, don’t get me wrong, supernatural stuff happens here. A boy’s head explodes. Fires can happen accidentally, illness and suicides happen every day, but heads don’t just explode. And yet, who can say that Daughter is the one actually responsible? What if, (as creationists would say: “just a theory”), unseen supernatural forces simply want to protect her for unknown reasons? Because when you start having supernatural stuff happening, everything is fair game. Pinheiro doesn’t give us the rules, doesn’t give us limits.

As you may have realized by now, all we’re absolutely sure is that Daughter looks at people. She does attempt three gestures in the book, though. She returns the tricycle (after Mother’s suggestion, and she doesn’t make new friends), she picks up a flower and she tries to save one of “her” victims from drowning (again, it doesn’t work because she’s attacked by someone else). Daughter is capable of kindness, she never physically attacks anyone. However, she’s surrounded by darkness (I’m sure you noticed the black gutters; they’re white in the present; after Daughter’s probable death, the darkness is gone). But, of course, maybe we’re just being influenced by Mother’s denial. It is possible that, after all, Daughter is Satan’s child (“There is no father. There isn’t, there is no father in the story”, says Mother, and that’s all she ever says on the subject), softened by Mother’s love. Who knows?

Truth is, though, that it doesn’t matter what exactly happens. Earlier I’ve said that Dora is pure suggestion and atmosphere, and the atmosphere is heavy. All those times I’ve said that Daughter is creepy, that’s atmosphere. When tree crowns look like black smoke, foreshadowing the fire that will consume lives, that’s atmosphere. And what cannot be denied, what we see, is that these two women become more and more isolated. Everybody else believes that Daughter is a monster. They have to move, Daughter has to leave school, they have to move again, this time to the woods. Mother has to adjust her whole life, she can’t even turn the lights on (Daughter doesn’t like electricity) and has to use candles instead. When they move to the ninth floor, they can’t use the elevator, because Daughter doesn’t like machines, and, when absolutely necessary, Mother has to force Daughter into the car. There is a deep solitude and sadness in Dora. But Mother’s constant denial (“we lived in perfect harmony”) betrays her resentment. Of course she’s not happy. And betrayal is part of Dora. When the last people die, Mother asks: “What was that?! What have you done?” Now she, too, believes her kid is a monster and that’s the last we see of Daughter.

And the best scene in the book is pure atmosphere. Daughter’s first (and, it is implied, last) birthday party (note that in the first panel her name is blocked by balloons):

Sure, Pinheiro could have done it all in one page, easily, but these three give the scene so much more weight. Children crying, parents perplexed, Daughter impassible. Cut, cut, cut, cut, in fantastic rhythm. It’s beautifully constructed. Again, of course, maybe the first kid simply had a potty accident and started crying, the others followed because that’s what little kids do, and it all has nothing to do with the fire that will soon follow. But you don’t really believe that, do you?

And, if you don’t, burn the witch! 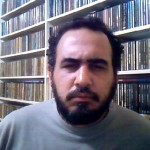 A slow man with a slow mind. A reader, not a writer. Brazilian, broke, boring and bald. Basically uninterested in anything that doesn't come from the 20th century, be it movies, books, comics, music, history or sexual partners.