I occasionally cry when I watch movies. That’s not unusual; lots of people cry during movies. What I find interesting is the fact that I have never cried during a movie with an MPAA rating higher than PG.

For some reason, good children’s movies tend to elicit a strong emotional reaction from me. Such was the case with Finding Dory, the latest film from Pixar and the sequel to the 2003 hit Finding Nemo.

Pixar needs no introduction. We all know that they were a pioneer in computer animation. Finding Nemo advanced the science of animation, particularly the animation of objects and animals in water; it is well-known that the animation staff for Finding Nemo attended seminars on marine biology in order to understand the creatures they were to animate.

But as much as I love Pixar, there’s a part of me that wonders why I’m so moved by such a mainstream, traditional story. Finding Dory is, in many ways, a standard children’s movie. It has a wide appeal, as evidenced by its box office draw. And at the time of writing, it has a respectable-but-not-stellar 77% on Metacritic. It doesn’t appear to push the technical envelope much further than Finding Nemo or any other Pixar film does. So, what made Finding Dory so moving for myself and others who loved this movie?

In order to start addressing this question, it’s important to look at this movie’s premise. Dory, a blue tang, is living on the Great Barrier Reef with the clownfish Marlin and his son Nemo, the main characters of the first movie in 2003. Dory’s defining quality is her forgetfulness, so she has no memory of her past or her family. When Dory invites herself on a field trip with Nemo’s school, an incident causes her to remember some details from her childhood that give her a clue where to find her parents. She acts immediately and decides to find them, and thus find her home. It is a fairly simple idea.

The premise can be seen in the first scene of the movie, which is a flashback to Dory’s childhood. Dory’s parents are trying to teach the adorable but memory-challenged young Dory to play hide-and-seek. This was one of the promotional scenes released before the movie was released and serves as a microcosm for the plot of the movie: Dory’s parents teach Dory to find them when she loses them, and in the movie, Dory finds them by following clues that they left behind for her.

Aside from its role as a microcosm, what makes the scene such great promotional material is just how painfully adorable it is. Little Dory’s mannerisms are exactly what we would expect from a toddler, right down to the unnecessary shot of her excited breathing in response to her parents’ praise. You cannot possibly get this level of cuteness in a live-action film; it would be creepy and unnatural. But you can get away with it in animation, and it doesn’t seem unnatural. At its heart, it is a realistic scene of two parents playing with their child.

The medium of animation gives us an interpretation of this relationship that makes it all the more poignant when we later find out how they became separated and then brought back together.

At its best, that’s what good animation does — it interprets, rather than copying outright. Such was the case with the movie Anomalisa, Charlie Kaufman’s stop-motion animated film. A number of reviews of Anomalisa claimed that the movie didn’t need to be animated. But I think they were missing the point. Anomalisa wasn’t animated because its story couldn’t possibly be told in live action; it was animated so that the characters’ expressions could be controlled down to the last detail. Every twitch and expression of every character was planned in order to showcase the animators’ observations about human behaviour. In an animated movie, nothing is an accident.

Similarly, when Pixar makes a movie like Finding Dory, it’s not because it’s impossible to make a live-action movie about talking animals. (It is possible, as evidenced by Nine Lives, starring Kevin Spacey, to be released on August 5th.) The decision to use cartoon animals is a conscious choice.

I think Scott McCloud had it right in his book Understanding Comics (page 36). When we see a photo of a human, we see another person, but when we look at a cartoon face, simplified to the essential facial features, we see ourselves.

In addition, Finding Dory has a fairly universal story: going home. It’s a universally identifiable theme. One of the most famous stories, Homer’s Odyssey, was arguably just about a guy trying to get home.

It’s no secret that plenty of storylines have been used more than once over the course of history. But why do we keep using them? Perhaps it’s like Andre Gide once said “Everything has been said before; but nobody was listening, so it all has to be said again.”

Or, maybe it has something to do with how our minds process stories. When we hear the same story more than once, the neural connections associated with that story get strengthened — and if we hear the story told in a new style or with new details, then this new telling becomes connected with every version of the story we’ve heard before. In a sense, telling an old story lets the storyteller piggyback on the success of stories we’ve already heard before. This is not necessarily a bad thing. If anything, it’s good, because it allows us to appreciate variations and riffs on the story even more.

What’s interesting is that none of what I’ve said here is particularly groundbreaking: it’s obviously true that a movie needs to make its viewers identify with its characters, so that we care about the challenges that character goes through. If you were to write a textbook on how to make a standard animated children’s film, Finding Dory follows that textbook to the letter. But sometimes, that’s not a bad thing. It is a standard story, very well executed. It’s enough to bring a tear to my eye. 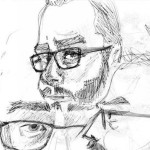 Benjamin Buckley loves cartoons, and has spent much of his life watching, reading about, and drawing them. For some reason, he has a degree in mathematics from Simon Fraser University. He has a habit of writing his thoughts down in the form of essays, some of which you can read on his Facebook page. When he's not writing, he enjoys drawing, juggling, and occasionally doing improvisational comedy.