The Moral Arc Of Eternity:

(Before beginning the article, be aware there are significant and comprehensive spoilers for the phenomenal and largely unheralded books discussed here. If you would consider reading them before beginning this, for your own sake, it’s highly recommended you do so.)

A vendetta that leads to New York City in the follow-up to Al Ewing’s first El Sombra novel, Gods of Manhattan. But while a crucial character, El Sombra takes a backseat here to America’s Greatest Hero, Doc Thunder, a titan in a blue shirt with a yellow lightning bolt decal, protecting the innocent and defending liberty from those that would undermine it in ways both grandiose and subtle. With superhuman strength, indestructible skin capable of withstanding anything up to a bursting shell, incredible senses and a keen scientific intellect, Thunder is the Superman of the Pax Britannia universe, drawing on both the character’s Golden Age roots as a champion of the oppressed, and many of the finer details of his conceptual ancestors and descendants, including Hugo Danner, Doc Savage, Captain America and Tom Strong. He takes in those society has disregarded when he believes in them as having value others have overlooked, and never kills; more Americans fly his emblem than the flag, and there’s scarcely a bar he isn’t insisted to drink free at. He is also, in the words of an unsympathetic policeman, “a friggin’ faggot, a liberal and a miscegenationist”.

A champion in the Second Civil War against the fascist uprising of Joseph McCarthy’s Hidden Empire that ended with the formation of the United Socialist States of America, Doc is in a polyamorous relationship with Maya, immortal goddess and queen of the Leopard Men of Zor-Ek-Narr (a relationship born of Doc’s somewhat embarrassed fetish for being trapped, tied up and tortured by merciless femme fatales), and Monk, the deformed ‘Gorilla Reporter’ that became Doc’s best friend and companion. His goal, in the most plainly-spoken and fundamental passage of the trilogy in articulating Ewing’s ethical intent, is “just standing up and doing the right thing, and being seen to do it. Because there were a lot of folks who didn’t, and the more of those there were, the more the average Joe might start thinking he didn’t have a chance, that the only way to play the game and win was to play it with no rules at all, golden or otherwise. Screw the little guy, stamp him down. Hate the different ones. Why not?…Believe what you’re told without question, or shrug, because what can you do? What can anybody do? The bastards run the world, we just have to live in it. What can do you?…So he wore his beliefs on his chest, and he always tried to do the right thing, and when he needed to stand up, he stood up. And because he was who he was, everybody saw it. And maybe someone took a look at him and realized that they could question what they heard, or they could step in when they saw something bad happening, or they could just try and treat people just a little better. Maybe just one person that day looked at him and thought: I should start trying.” There’s no conception of himself, despite his power and prestige, as above those he protects. He simply knows that his power offers him the chance to help, and by extension inspire, more people; every heroic act on his part is rooted in faith of the potential of those he protects to become better than what they are, and the need for them to live in freedom to reach that potential, whether in being able to stand up against tyranny, or simply live an unconventional lifestyle such as his own without censure or judgement. (*1)

Standing against Thunder is the Blood Spider, a gun-toting vigilante in black leaving behind his signature card at the scenes of his massacres: Where all inhuman/Devils revel in their sins – / The Blood-Spider spins! Secretly Parker Crane, old-money socialite in spite of the USSA’s supposed socialist principles, he is the embodiment of its darkest side. Intending to flush America of the “inhuman scum” that threatens it through “real justice, achieved by real power”, mowing through the likes of muggers, terrorists and pedophiles, he’s achieved a degree of respect in many circles, building a web of contacts from disgraced scientists, members of high society and even crooked police offers bent to his will. If El Sombra is built on many of the same principles as Grant Morrison’s Batman, the Blood Spider is a mirror upon Frank Miller’s Dark Knight and the Shadow, taken the absolute limit. Relentless, remorseless, obsessive and unstoppable, a billionaire in black living beyond consequence enacting his elitist social agenda on “quite the wrong sort of person”, with designs on reshaping his city and society in his image by acting as a symbol for the frightened and hateful to flock to. Doc Thunder may have won the approval of the oppressed and the state alike, but to many of those who fought on the wrong side of the war – those who made, by the time of the present, UnAmerican the most taboo and reviled of slurs, a one-word symbol for the hatred of the Other that still threatens to tear the nation apart – the Blood Spider stands for them, and by the last page they still believe in him and the future he represents. A future that, of course, he fights to defend only against those not white, not straight, and otherwise decidedly “non-Aryan”.

“…a persona designed to appeal to the worst in people, to bring the citizens of New York around to his cause, his war on crime, which would, of course, then become a war against ‘urban crime’. Or some other little euphemism. ‘Inhuman’, for example. Sounds a lot more relatable than subhuman, doesn’t it? Comes to the same thing, though.”–Doc Thunder

In the end, unsurprisingly, the Blood Spider is exposed for what he and all he represents truly are: fascistic, nationalistic, the racist descendant of Nazi ideology brought low by those considered inferior in the form of Doc Thunder and El Sombra. While Thunder’s credo is rooted in the belief of the individual’s capability, Crane’s motivations are laid bare early in the book by the Bizarro-esque forces of the terror group E.R.A.M.T.H.G.I.N., who consciously molded themselves in his own image: “Us am vigilantes! Am us not men? Us use violence to effect social change! Am us not men? Us bring terror to underclass, make streets safer for overclass! Am us not men? Am us not men?” Ultimately, even the Blood Spider – reduced by to a mentally and emotionally shattered shell by stories’ end, quickly and almost mercifully killed by El Sombra – is the unwitting servant of more sinister interests in the form of Lars Lomax, the Luthor to Doc Thunder’s Kal-El and the acknowledged most dangerous man on Earth. Born to poverty with a brilliant mind and wishing to perfect the Earth, he instead turned to crime out of jealousy for Thunder’s capabilities, resentment for his unwillingness to tear down the social order, and outrage that America would rally around such a ‘freak’, only to mutate himself into something no longer human himself to conquer the Earth. In the end, he serves only to illuminate Doc Thunder’s point: accidents of birth play little role in what both men become nearly so much as upbringing, as while Lomax, born to the underclass yet possessed of brilliance, grew into a contemptuous would-be dictator out of disdain for his family, Thunder, revealed to be the results of a Nazi experiment to create an Übermensch, became liberty’s greatest defender thanks to his loving, eventually self-sacrificing mother and caring guardians after her death.

Those twin principles of liberty and egalitarianism are most visibly the bedrock of Gods of Manhattan among the three titles, fitting well with its superheroics as opposed to El Sombra’s western pulp revenge or Pax Omega’s science fiction anthology. Time and again, Doc Thunder’s philosophies are proven not only more high-minded and sincere, but more practical in intent and effect; the unambiguous victory of the climax is not the triumph over Crane and Lomax, which require El Sombra’s deadly intervention when Thunder cannot finish the job, but rather Thunder’s demonstration to Blood Spider of the social capital his deeds have earned him by orderly clearing Grand Central Station for their final battle in mere minutes with a simple request to passers-by. As Doc puts it, “President Barlet refuses to negotiate with terrorists. But I’ve got his direct line. At the end of the day, you get more by being loved than by being feared.” Even Blood Spider’s entire scheme revolves around this simple fact, and by tales’ end he has truly become more dedicated to his mission of ‘saving’ America, however misguided, than his original affiliations with the Nazi Party. His efforts are doomed to fail, as he gathers fair-weather allies, is manipulated in his boundless arrogance, and is bested by precisely the ‘wrong sort of person’ he devoted his life to crushing underheel. He could never succeed, not because of some inherent universal predisposition towards decency – innocents perish, Blood Spider’s adherents remain devoted, and few of the characters ultimately have anything that could be called happy endings – but because his beliefs lack an essential understanding of the needs and capabilities of those that surround him. Thunder, on the other hand, draws to himself and inspires allies Crane would consider abhorrent on principle alone – even El Sombra, so swayed by Thunder’s deeds that he chooses to partner with him in spite of his origin as a Nazi weapon – who prove key to securing the day.

Next time we’ll look at the final instalment: Pax Omega.

(1) Sequart’s own Colin Smith has written an excellent essay on Doc Thunder and his ethical grounding in Gods of Manhattan at his blog Too Busy Thinking About My Comics http://toobusythinkingboutcomics.blogspot.com/2011/09/his-gun-full-of-magic-bullets-last.html 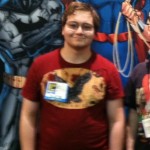