The Pride of Baghdad

When you make your living cutting brand new worlds whole cloth from your personal mental firmament, it takes a special kind of writer to splatter those brain children over twenty-odd pages of cheap newsprint on a regular basis. For those few writers that have the talent and the creativity, the rewards are minimal, so you’d better love what you’re doing. In the minuscule litany of those who love writing comics, there are even fewer who stand out as supernova bright as Brian K. Vaughn.

Brian is the scribe responsible for Ex-Machina, which blows the doors off The Watchmen as an attempt to portray superheroes in a real world setting. His teen superhero series Runaways, offers a fresh and infinitely interesting spin on what it takes to be a hero, even as it blurs the lines between good guys and bad guys. His science fiction series Y The Last Man is a twisting journey of self discovery that pulls equal bits from Stephen King’s The Stand and James Tiptree Jr.’s The Screwfly Solution, and beats them both in the grand smackdown of post apocalyptic speculative fiction.

So, it’s no wonder that his stand alone graphic novel Pride Of Baghdad, which seemed like kind of a stupid idea on the surface, turned out so remarkably good. The high concept genesis of this little gem started its life as a news report about a quartet of lions that escaped from the Baghdad Zoo during the U.S.’s 2003 bombing of Iraq. The lions were starving, frightened out of their minds, and half dead from exhaustion and exposure. The U.S. Army mercifully put them down. The twist on this is that the story is told from the lions’ points of view.

I’m always wary of anthropomorphizing animals. If taken too far you get extremist terrorist organizations like P.E.T.A. and its hyper violent sock puppet A.L.F., or you get regurgitated pablum like Barney the dinosaur, and stupid people with too much money and way too much time on their hands who like to dress their pets up in leather bomber jackets and Harley Davidson paraphernalia. If done right though, you get fine religious allegory like Richard Adams’ Watership Down and Neil Gaiman’s Dream of a Thousand Cats, or a masterful deconstruction of the nature of revolution like George Orwell’s Animal Farm.

Under less skilled hands this story could easily have turned into just another political screed about how bad the United States is and how the evil American Military gunned down in cold blood four poor defenseless animals. It’s not. Instead, Pride of Baghdad is a well crafted, impeccably told tale that is entertaining, poignant and tragic.

Pride of Baghdad works well as a story. Brian has discovered the secret reason why nobody writes good war stories anymore. Everybody thinks the genre has been played out, that there’s nothing new, or creative, or interesting to tell. By turing the point of view topsy-turvy, he’s hit on something fresh and exciting. Brian’s story takes us on a terrifying walk through the bombed-out wreckage of Baghdad. The pride keeps a running dialogue that serves as a commentary that explores heavy ideas like: what happens to the civilians during a war, what is the price of freedom, and how do you handle the big scary world when your caregivers suddenly go away?

The part that resonated most with me, was a scene where the lions come across a turtle and he recounts the ecological disaster that the Hussien government unleashed during Operation Desert Storm. I was in Saudi Arabia as part of that operation, and I can tell you that the turtle in this story doesn’t even scratch the surface of the devastation that occurred outside the Iraqi and Kuwaiti oil fields.

But that’s what I like about this story. Brian doesn’t browbeat you with the obvious, nor does he ever give in to what was probably the overwhelming urge to preach about how bad war is. We’re reading the story, we get it, war is bad. He leaves it at that, preferring instead to concentrate on giving us believable characters and a great story.

The other half of Pride’s creative team, Nico Henricson is relatively new to American comics. His first graphic novel, Barnum, was well drafted, if a bit stiff. With Pride of Bagdhad he pulls out all the stops. There are no humans to speak of in this tale, but they’re not missed. Nico gives each of the animal characters a wide range of expression and movement that brings out the human qualities in them. This would detract from the realistic feel of the story, but Nico keeps the lions true enough to the source material that they are still believable as animals.

The backgrounds and landscape of Pride are phenomenal. Nico is a master of stylized detail and it’s on full display in these pages. He gives us a guided tour of a little slice of hell on earth, and we come away the better for it.

There’s no colorist credited, so it’s a pretty safe bet that the color choices are Nico’s. He applies a bit of a fade to the dull browns and oranges in the outside scenes, which gives the story an effect that recalls some of Ridley Scott’s lensing choices during Black Hawk Down. It’s a great effect that applies a sort of fog of war. It evokes a feeling of unease that keeps the idea that there is danger around every corner, just at the back of your mind where it should be for this type of story.

Pride of Baghdad is solid work by a team that meshes well. It’s an intense, sad story that is intelligent, relevant, and superbly drawn. It’s a short film on paper that’s worthy of an Oscar, or in this case an Eisner. Pick it up and give it a try. You will absolutely not be disappointed. 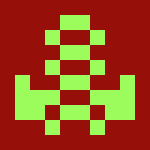