I’m not really one for movie tie-in comics because the whole idea just seems so superfluous to me. Artists on these comics are in an awkward position where they are either criticized for not making the characters look enough like the actors on the screen or they try too hard to make them look like the actors. Writers have to either retell the story of the movie (making it pointless to purchase the comic when you can see the movie) or they tell some sort of prequel story that will provide little to no impact on the movie itself. The whole exercise just seems like a pointless cash grab which is saying a lot considering the comic book industry is already founded upon pointless cash grabs (see: event comics like Secret Invasion and Blackest Night, or series like Justice League Presents: Vibe and the 15 different Avengers titles out there).

So, when the J.J. Abrams Star Trek was released, I avoided the movie tie-in comic, Star Trek: Countdown, because I was never inclined to care before. My wife read the four-part mini-series and went on and on about how great it was, but despite her endorsement, I didn’t read it until a few weeks ago so that I could contribute an article to Star Trek week on Sequart. And, despite my hatred of tie-in comics, I found myself not only enjoying Star Trek: Countdown, but I found it to be not only a great story on its own, but also an absolutely necessary reading experience that completely enhanced the Abrams movie. But perhaps the most interesting aspect of Star Trek: Countdown is that it provides a link from Star Trek: Nemesis (the last Star Trek movie made before the J.J. Abrams film) and the Abrams film.

Star Trek: Nemesis was the final film for the Star Trek: the Next Generation franchise. The plot revolved around a clone of Captain Jean Luc Picard who was raised by a side-species of the Romulans known as the Remans. The film concludes with (spoilers!) Data dying, but with the possibility of being reborn in another robot body. The film isn’t bad, but it somehow lacks the punch that Star Trek: First Contact had and avoids controversy unlike Star Trek: Generations, so it is somewhat forgettable (not as forgettable as Star Trek: Insurrection which was just one long, boring episode of the series).

The J.J. Abrams Star Trek was a reboot of the franchise, so it would be ridiculous to expect his film to address anything in the Next Generation films. It would be superfluous and unnecessary to even suggest that there needs to be some sort of connection between the two very different takes on the franchise. However, Star Trek: Countdown connects them and does so very well.

We learn that Data has been resurrected in another body and is now the Captain of the Enterprise. Picard has retired and is now an ambassador to the Romulan Empire. Geordi La Forge is an Engineer who is designing his own ships now. Finally, Worf is now a general in the Klingon Empire. These small details along with a guest appearance by the Remans are enough to make the connection between Nemesis and the Abrams film and they would have been impossible to portray on screen given the time constraints of the film and the desire to make the film as accessible as possible.

The story is written by the film’s writers, Roberto Orci and Alex Kurtzman and most of the narrative of Star Trek: Countdown is an extended version of the conflict established in the film already. Nero wants to save Romulus from destruction so he enlists Spock to help him. The Vulcans won’t aid the Romulans and Romulus is destroyed. Nero blames Spock and tries destroying Vulcan, but Spock uses Red Matter to send Nero into the past. In the film, Spock relays all of this information to a young Kirk and it all feels a bit convoluted and as if he has basically pulled a “yada-yada” on some of the details. It’s a small fault in the film, but it can’t really be helped given that the movie already sits at two hours and has to establish the six main characters and their development, Captain Pike, and the villain. With SO MUCH to do in this film, it would require an additional half hour to properly establish a sympathetic villain for the movie. So, as the movie stands, Nero comes off as little more than a generic bald, tattooed villain; yet another poorly contrived attempt at making a villain that is as memorable as Khan Noonien Singh.

Thankfully, Star Trek: Countdown does much to expand Nero’s personality by showing his love for his family, his patriotism for Romulus, and his relationship with Spock. Nero only wants what is best for his family and his planet, but the reader connects to Nero through his frustration at being denied at every turn. Denied by the Romulans and refused by the Vulcans, Nero’s transformation from concerned citizen to bitter murderer is believable and heart-wrenching.

Finally, the art from David Messina is absolutely perfect. He perfectly balances capturing the likeness of the actors, and also still making the characters seem specific to the comic. The space battles in particular are impressive in their scope and the destruction of Romulus is gorgeous.

Star Trek: Countdown is an incredibly balancing act that not only tells a solid story on its own, but also provides a perfect link between The Next Generation films and the new Abrams franchise (a link that may have been unnecessary, but that makes it all the more amazing). It provides more depth to the Abrams film by developing Nero and making him into a sympathetic villain and expands the Star Trek universe in meaningful ways. Taken all together, it’s an essential buy and well-worth your time. 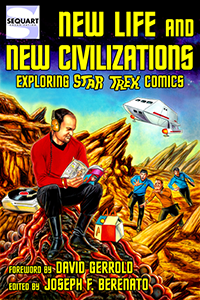 The preceding is included in its final and revised form in New Life and New Civilizations: Exploring Star Trek Comics. If you want to support work like this or would like to read more, please consider purchasing it. Thank you!
Tagged Star Trek, Star Trek (2009 movie), Star Trek (Abrams continuity), Star Trek Week, Star Trek: Countdown, Star Trek: The Next Generation. Bookmark the permalink.

Cody Walker graduated from Missouri State University with a Bachelors and a Masters of Science in Education. He is the author of the pop culture website PopgunChaos.com and the co-creator of the crime comic NoirCityComicBook.com . He currently teaches English in Springfield, Missouri.