Dylan Dog: Of Death, Of Love

Death –
Death –
Death comes sweeping down –
Filthy death, the leering clown.
Death on wings, death by surprise,
failing evil from worldly eyes.
Death that spawns as life succumbs,
while death and love, two kindred drums,
beat the time ‘till judgement day –
An actor in a passion play –
Without beginning,
without end –
Evermore,
Amen.

Freshly showered, in his dilapidated home within the grounds of the Buffalora Cemetery, Francesco Dellamorte is putting together his skull-puzzle, an interminable task. His gun is close by, just in case a returner tries to climb out, over the cemetery walls. His assistant – Gnaghi – a human-visaged “creature [of] we don’t know what kind,” “a sort of a dog that lives beneath his master” with whom Dellamorte has a “relationship of sadism, slavery, hate and love, but ultimately of friendship and affection – because he loves that dog” (Soavi) stands behind him piling food upon his two plates: pasta and sauce, meat, salad, bread, bananas. “You know, you really are disgusting when you eat, Gnaghi,” says Dellamorte (played, significantly, by Rupert Everett). “Gna,” responds Gnaghi. “Yes, you are right,” smiles Dellamorte, “I suppose it does all get mixed up in the stomach in the end.”

The first issue of Dylan Dog was published by the famous Italian comic book publisher Sergio Bonelli Editore in October 1986. Today, more than three hundred issues later, it is going strong, selling throughout Europe, according to the Bonelli website, up to a million copies a month (including reprints). Dylan Dog centers on a private investigator of supernatural phenomena (whose likeness is based on Rupert Everett), an ex-Scotland Yard detective who lives and works in London with his assistant, Groucho (who looks and acts like Groucho Marx but is not, in fact, Grouch Marx; in the seven issues published by Dark Horse in 1999 and 2002, this sidekick has been changed to a de-moustachioed version of Groucho, and named Felix).

This is how Thomas Froehlich describes Dylan Dog: “A former Scotland Yard associate who’s afraid of flying, a reformed alcoholic that only wears dark jeans, red shirts and a black suit-jacket (of which he has several identical outfits in his closet), occasionally appearing clumsy while simultaneously strolling through events with Fred Astaire-esque flair, a self-declared ‘Horror Investigator’ (indagatore dell’ incubo) who is also an incorrigible romantic and a melancholic womanizer, [and a] driver of an old [yellow] Volkswagen Beetle with the plates ‘DYD 666.’ … Dylan’s origins are murky and contradictory; there are rumors of a father with a split soul, even of the devil himself; on his mother’s side there seems to be a certain affinity towards witches and zombies. However: no concrete facts are known.”

The world this protagonist inhabits is a world – like that of the Marvel Universe – with one foot in reality, and one in genre fantasy.

The urban environment of London provides the most important way in which the ‘realism’ of the comic is established. In the context of the Marvel Universe, Jack Kirby spoke of its superheroes as “figures that fought and twisted” in “violent ballets” (qtd. in Bainbridge 171) figures that were, if extraordinary, always “grounded by real-world (if overtly melodramatic) concerns in a real world city, New York. As Kirby himself described his depictions of the city: ‘If you grow up in a city and see the city … you’ll get a city as it really is, with all the detail that you remember. … I would draw that city exactly as it was, brick by brick: the garbage in the street and the things floating down to the sewer’ (Bainbridge 172). As Jason Bainbridge concludes, “New York City is therefore not only the spine of the Marvel Universe, it is a suture – suturing the Marvel Universe to the real world, providing a material context for these iconic forms” (172). The London of Dylan Dog plays the same function: it is a suture that connects not reality and a super-hero universe as is the case with Marvel, but reality and what we can here call surreality, whose main characteristics can be described as, in many important ways, prototypically postmodern.

The London of Dylan Dog is, while being a kind of doppelgänger of the actual physical space of London, also a gateway into the surreal spaces of the comic’s world. On the one hand, as the Bonelli webpage explains, this world is one “of everyday reality.” It is “never modified” as “the monsters or aliens never become part of the general public awareness.” On the other hand, this space is always already modified in relation to its actual counterpart: the street on which Dylan Dog lives, Craven Road (chosen as an homage to the director Wes Craven), is only one of the many examples of this use of reality and its simultaneous distortion (apparently, there is in London only one “Craven Road in the city center in Westminster … and the number 7 is an Italian restaurant called Bruno’s Snack Bar”).

The very first issue of the comic, entitled “Dawn of the Living Dead,” starts to elaborate its mythology (Dylan Dog’s arch-nemesis Xabaras who later proves to be Dylan’s father is here introduced) via a story about the living dead. It, importantly for its overall narrative strategy, does so by closely engaging with and referencing the filmic world created by George Romero starting in 1968 with his Night of the Living Dead. This strategy relies on what Julia Kristeva has called intertextuality, an important element of Dylan Dog’s overall narrative form, and which can be defined as “a network of sign systems situated in relation to other systems of signifying practices … in a culture” (Godard 568). In other words, each approximately one hundred-page Dylan Dog story is a narrative weaved around a framework of cultural allusions that can “occasionally devolve into a veritable orgy of movie references and film quotations” while, importantly, eluding the obvious threat of allowing this strategy to “overshadow or even endanger story integrity – let alone to over-ironize it” (Froehlich). As Oliver Ho puts it – “Dylan Dog is practically obsessive in its allusions to films.”

This strategy is enhanced by an incorporation of other kinds of cultural ‘texts’ into Dylan Dog’s textual and imagistic components, ‘texts’ which are taken from both traditionally conceived ‘low’ and ‘high’ realms of art. The series is drawn (and written) by a number of different illustrators (and authors) who draw inspiration from, among other places, the Italian tradition of fumetti and the famous EC horror titles.  Importantly for its postmodern/intertextual narrative strategy, however, the first and signature illustration of Dylan Dog is done by Angelo Stano who, for his work on the series, draws upon the work of Egon Schiele to add visually to the macabre, surreal atmosphere of the comic.

One of the eminent European expressionists of the early twentieth century, Schiele’s art foregoes the search for the beautiful in art in favour of the material body, dissected, distended, diagrammatized: “Rather than … the eloquent postures of models, he preferred to look for the signs of primordial language on himself. … The epidermis lost its seductive power when it was drawn tight by bones that jutted out at the joints. The smooth skin of the beautiful young man of twenty was now just a hollow mass of creases and bumps. The serpentine figure was replaced by nervous zigzags, and the elegant hand gestures by a clump of gnarled fingers. The eye was drawn to the acute- or right-angled formations of the pelvis and shoulders. The truncated body was stretched and set in a catatonic tension that made the hair on the head and body stand on end” (Gaillemin 32). Here, the foregoing of absolute realism in favour of expressionism (conceived as a slightly – emotionally – distorted realism) works together with the depiction of London in order to represent a meeting of the actual and the fantastical.

In the belly of the Dylan Dog text, it all indeed gets mixed up in the end.

A more specific example: both the film Dellamorte Dellamore and a special issue of the comic entitled “Black Horror” (“Orrore Nero,” published in July 1989) written by Sclavi and incorporating elements of the narrative from the film, deploy the image taken from René Magritte’s painting “Lovers.” This image, which in Magritte’s painting is most readily read as a representation of frustrated desire lends its surrealist aura to a love scene between a (beautiful, of course) widow and the guardian of the cemetery inside an old ossuary. Here, however, the setting – both the physical ossuary and the more general setting of the film/comic about the undead – transforms the representation of frustrated desire into a momentarily freeing, if ultimately frustrating, act of love. As death and love, and death and life, are shown to be only quantitatively different rather than qualitatively so, the kiss between the two veiled figures paradoxically instantiates a moment of true connection which allows the two lovers to, for a brief moment, escape the world populated by what Francesco describes as “the living dead and the dying living.”

The Postmortem of the Postmodern

This deployment of Magritte’s image leads us to a crucial aspect through which Dylan Dog escapes the often somewhat confining postmodern logic of intertextuality, even in its most postmodern, meta-aware moments. For example, in its twenty-fifth issue, entitled “Morgana” (published in October 1988), written by Sclavi and drawn by Stano, we encounter some now-typical instances of narrative meta-awareness: the undead are depicted reading an issue of Dylan Dog; one of the characters is a comic book artist who is clearly a Stano-doppelgänger, and he appears within both the comic and within the comic within the comic; the final page depicts a page-within-a-page. Yet, even here, the commitment to characterization, to a kind of humanism detectable within the expressionistic/surreal realizations of both the illustrated figures and the space within which they live, is evident. As Froehlich writes, “despite the raging storm of references Sclavi and his illustrators never cease to take their character … seriously, even if artistic breaks and crossover/mutational elements meander throughout the stories. Dylan Dog represents the antithesis to all the imitation artworks … of this world, for which it’s only ever about the clever, tongue-in-cheek inventory taking of one’s own hollow pop-cultural world, be it in film, literature or music. Similarly to … Dellamorte Dellamore, splatter driven horror alternates with dreamy, melancholy poetry – and occasionally, in certain scenes and panels, [these] enter a dark symbiosis.”

Dylan Dog is a character that can easily belong in a melodrama: he is often shy and sensitive; he has a penchant for falling in love; he suffers from numerous phobias; he romanticizes the past and is suspicious of technological aspects of modernity. This unabashedly sincere, romantic aspect of characterization could easily clash with the frequently ironic disposition of postmodern literary representational strategies, yet it does not. It, rather, elevates the comic series into a representation of a strange humanism that, somewhat paradoxically, also admits that most often in this surreal world, it is the human element that is most monstrous. 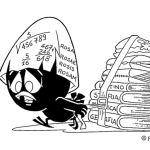 Nemanja Protic is, for just a little while longer, a PhD student in English at York University. He's ABD, and even the D -- which focuses on what he likes to call "the contemporary grotesque" -- is almost done. He lives in Toronto. You can find him on twitter as @brynnbeard. He likes comics.