Picture Worth a Thousand Words:

With the end of year, “Best of” lists are a common sight, and Prophet by Brandon Graham, Simon Roy, Giannis Milonogiannis, and Farel Dalrymple seems to be on every one of them. Not that it’s undeserving, of course. I’m quite a fan. The critical praise and celebration, as well as my own enthusiasm, just makes me consider why exactly it works so well. I’m trying to pinpoint the exact gears behind Prophet’s efficiency, and it all seems to come down to one thing: visual storytelling. Graham and crew are able to hinge conflict, story structure, and characterization on pure depiction, shifting Prophet toward a visually driven narrative and providing the artists more control of the story than the writer. Prophet is an interesting example of how artwork can dictate the reading experience.

As both a character and series, Prophet occupies our collective memory as but a relic of that early Image Comics wave and a further detail in the greater Rob Liefeld joke. The book and character represent the ilk of that era like many of Liefeld’s creations. Big and brash, it was another concept built upon minimal craft and large amounts of testosterone and gun powder.

With what Graham and the art team have done, though, Prophet now stands for something opposite: subtlety. As critic Tim Callahan points out, the book is more “Post-Extreme” than the loud, clunky attributes of Liefeld’s “Extreme.” I tend to agree. Though, like Liefeld’s interpretation, Graham’s Prophet clearly receives much of its attitude and personality from a visual origin. It may not possess the vigor of Stephen “Splatt” Platt’s line art, but in its own way, there’s a visual definition shaping the overall intent of the comic book.

It comes early. Try pages two and three of issue #21, drawn by artist Simon Roy (the first issue of this bold new era).

As a spread, this brief sequence accomplishes a lot in terms of setting a scene and suggesting what lies ahead for John Prophet. The large splash panel anchors everything, but the four smaller panels are important. They initiate the struggle innate for the character while introducing the comic’s larger themes of birth and rebirth. The capsule John falls out of could clearly stand in for your typical womb, but production-wise, the touch of black gutters around the panels gives everything a claustrophobic vibe. It’s not on purpose (the whole book sports those black gutters), but it cramps the space nicely in this particular instance, taking away some of the light and emulating the space inside that capsule.

He falls down, vomiting in the sequence, while the “camera,” we’ll say, moves in and tightens. The frame gains focus on John and, by the fourth panel, the ground. It’s here that Roy builds his reveal of the splash panel. In that last, small block, he narrows the reader’s focus, aiming our eyes at the dirt, but as we skim down we’re suddenly shown the expanse of the landscape around our protagonist. As John Prophet stands in the image, we too, as readers, sort of stand up and take notice of the world we’ve just been thrown into. In much a way, we are John, experiencing the environment first hand.

The reveal generates some textures and shows off some of the creative creature designs, but really, it summarizes what this book will revolve around. In that big shot, the reader understands that this story is, while many things, about the landscapes and this guy’s trials within them. That vast wasteland out ahead of him is what he must conquer, and where he stands is simply the starting point.

This embodies much of Graham’s interest in the human machine. The general plot of Prophet is that mankind must be restarted and once again build its empire, assuming control of the universe. To show this imperialistic tale, the creative element puts man against the land and the creatures / beings / organisms that live on it. The general tale is grand – epic like any sci-fi proposal – but the creative team focuses our attention on the smaller gears within the greater mechanism: the people and places. This gives us an anchor and immediately humanizes things, yet it also oddly offers something bleak.

We root for Prophet at first. We expect that’s what we’re meant to do. But as the series progresses and a certain character is introduced (Old Man Prophet), we learn that the Earth Empire might be a bad a thing. The mission becomes a project financed by evil intentions (a command of land).

There’s a brief instance at the end of issue #23 that signals this. As our main John Prophet clone concludes his mission of reactivating the Empire, he meets fellow Prophet clones inside the “war womb” known as the G.O.D. Satellite. Colorist Richard Ballermann makes a simple but effective choice here by casting a hot red over the entire scene, suggesting a danger associated with this reactivation. The entire scene gains a feeling of alarm, and artist Roy contributes to this tone through the facial expresses of our John Prophet. We see a look of shock while a stream of blood slathers down his face.

Each issue plows ahead under a pretty cyclical structure. You open the book at Point A and follow a particular character or cast to Point B. It becomes familiar after a few issues, but that’s welcoming. The reader’s attention divides from the plot and snuggles up to the visual end of things.  Which is for the better, because watching Prophet unfold sure beats reading Prophet. The story itself almost isn’t as interesting without the approach by its artists. This comic is just too good at using setting and placing characters up against it.

A nice example of this is in issue #24, drawn by Farel Dalrymple.

Like #21, the issue commences with another John Prophet clone exiting stasis and entering the task ahead. At a point, John comes into conflict leading to an explosion inside the space station he’s racing through. The shock waves send him through the hull and out into the ozone, giving us the page above.

Graham offers some descriptive narration, but it’s more a compliment to the real work Dalrymple does. He uses a 2 x 3 grid here (six panels), each nailing a beat of John’s physical struggle to fight back against his situation and survive. But what is notable here is the speed of the event: the matter-of-factness. The grid and page design play a part in that. It’s very balanced in presentation – no panel is bigger than the other. Each beat of the action receives the same amount of space to transpire, moving the reader’s eye at a consistent, strong pace.

John Prophet is also characterized here. He’s calm, cool, and collected. He just acts, throwing his hunting knife through the skylight without hesitation. This action shows his dedication to not only the mission (completing it) but survival. This character’s a survivor, first and foremost, calling back to John Prophet’s Liefeldian origin as a man out of time.

We’re at a point with Prophet where eleven issues exist, and countless clones occupy the narrative, yet it’s all been kept pretty straight. Even visually, despite physical features attributed to the clones (one has a tail, for instance), the characters are identifiable, and their subplots have particular voices. This is really achieved, almost brilliantly, by the way the artists have been arranged, appointed and scheduled to their corresponding issues.   Three artists, along with the one issue drawn by Graham, author this series, and while the split chores keep the comic at its monthly pace, it also puts the artists in a position of really starring.

John Prophet, through his various iterations, isn’t a very vocal character. Sure, he acts, and that defines him, but personality isn’t his forefront feature. Instead, the styles of the individual artists fill in for personality. Take issue #25, drawn by Giannis Milonogiannis. The plot involves a task squad of Prophet clones taking down a huge sauropod-like creature in order to capture the original John Prophet. This, of course, involves violence and a ferocious tone to establish the squad’s threat, and Milonogiannis, just through style, breathes life into that whole idea. His line art scratches across the page, dragging out movements made by characters. This conveys a sense of speed, and the jagged presentation, along with Milonogiannis’s cross-hatching, offers something sharp and moody.

Along with Roy and Dalrymple, the artists begin to command the characters, and it’s safe to say the reader recognizes the visual style before anything else. Style signals what’s in store, and by aligning each artist with a particular subplot, Graham has safely saved Prophet from slipping on the usual downfall of a clone plot: losing track. In essence, the art styles are the characters, which in itself is interesting because that means readers are potentially invested more in the artists than the fictional figments they draw. That’s a shift in mentality, or at least an effort to place the visual aspect of a visual medium under the spotlight. That says something about Graham as a writer and organizer. He is, primarily, a cartoonist, after all.

With Prophet, science fiction finds the right approach. The great set pieces and essence of atmosphere are too advanced for words, so they’re instead ignored. Roy, Dalrymple, and Milonogiannis paint what we need to know, leaving room for investigation as we march right alongside John Prophet, experiencing what we can.

The comic book has always been visual, but Prophet makes quite an effort to show us why. It’s not pretentious, just efficiently concerned about how best its story should be served. In this case, the creative crew knew it best to leave words out of the picture. 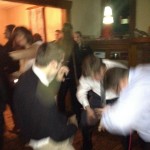 Alec Berry studies journalism at West Virginia University. He writes about comics because girls are too complicated. He has a blog (alecreadscomics.wordpress.com) and tweets occasionally (@Alec_Berry).