Batman Begins from Comics to Screen 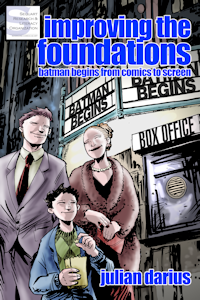 "Darius did his homework... I enjoyed the book immensely and read it in less than two days. I strongly recommend it."
-- Batman-on-Film.com

Studies the 2005 film, directed by Christopher Nolan, paying particular attention to how it draws upon its comic-book source material.

Besides spawning the unbelievably successful The Dark Knight, Batman Begins grossed over $200 million domestically in its own right. The film, co-written by comic-book writer David S. Goyer, has been widely praised for its fidelity to Batman comics.

This definitive book studies the film and its comic-book appropriation in detail. Darius examines the evolution of Batman’s origins as well as previous attempts to film that story. Contains scene-by-scene analysis of the film, including changes from the script, opening up its themes through crisp, insightful language. Also explores the film’s realism in contrast to past Batman films, its reception, its box office, and recommendations for further reading.

No fan of the film, whether novice or expert at Batman comics, should be without this book.