Everything and a Mini-Series for the Kitchen Sink: 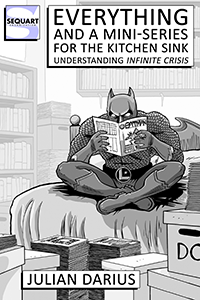 Infinite Crisis wasn’t just a crossover mini-series; it was a sprawling network of multiple such mini-series, leading both in and out of the main one. It redefined not only the DC Universe but what a crossover could be. In its scale, it exaggerated both the advantages and the downsides of the universe-wide crossover form. In this short book, Dr. Julian Darius explores the event from start to finish, including its place in the history of super-hero comics.

The contents of this book are included in Classics on Infinite Earths: The Justice League and DC Crossover Canon.