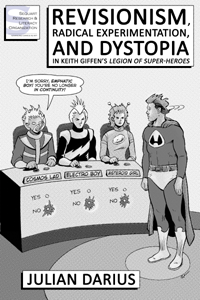 No other run divides Legion of Super-Hero fans like Keith Giffen’s. To detractors, it dismantled everything good about the series.

In this short book, Dr. Julian Darius argues that Giffen’s run offered an ambitious and unprecedented response to the growing maturity of super-hero comics — one that, far from trashing Legion history, actually respected it.

The contents of this book are included in Teenagers from the Future: Essays on the Legion of Super-Heroes.