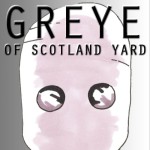 Mister Mxyzptlk and the Dilemma of Drawing in Five Dimensions

A 3-D visualization of Mister Mxyzptlk, courtesy of Mattel. As evidenced by 2017’s “Rebirth” storylines, one of Superman’s more enduring adversaries has proven to be Mister Mxyzptlk, a contemporary entry into trickster god lore. Across… [more]

Superman dies in Lois’ arms in the denouement of “Superman” no. 75 (1992) by Dan Jurgens and Brett Breeding. Source: https://comicbookclog.com/2015/06/05/comic-book-classics-revisited-the-death-of-superman-part-7/ The fall For a brief moment in the autumn of 1992, the Doomsday monster had… [more]

Bill Everett tribute for Marvel’s 75th and Daredevil’s 50th anniversaries (2014) by Stephen Sonneveld, featuring William Blake’s “The Great Red Dragon and the Beast from the Sea” (1805-1810) Bill Everett was an expert storyteller, whose… [more]

Few images are as iconic in Western culture as the grinning gourds that populate our harvest festivals. Initially, such sturdy fruits made practical lanterns. The artistry of carving faces, and weaving religious and secular folklore… [more]