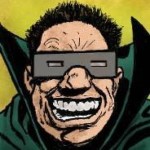 Making his first professional sale at the age of eighteen, Paul O'Connor has created worlds, characters, and stories for better than three decades. He was a comic book writer for Malibu Comics, and has designed video games for Oddworld Inhabitants and High Moon Studios. Paul is presently Brand Director of Appy Entertainment, a publisher of games for Apple's iPhone and iPad. Paul writes about comic books regularly for his own blog Longbox Graveyard , which is entering its third year of publication.

Who is Don Blake?

Thor returns to cinemas this week, in the second installment of an improbably successful film franchise that has made Chris Hemsworth into a worldwide movie star and familiarized millions with the titular norse thunder god.… [more]

The Last Days of Superman

Superman might be the world’s most popular superhero. He’s also among the most difficult to write. Through the years we’ve seen Superman travel through time, endure the heat of the sun, and perform so many… [more]