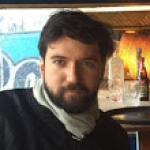 Nikolai Fomich is a writer and ESL teacher in Philadelphia. He received his M.A. in English from Rutgers University, where he wrote his thesis in linguistics and completed his Comprehensive Examination in Islamic Literature. His interests include linguistics, literature, comics, film, history, art, and politics. Since 2008, he has written for various newspapers, websites, magazines, and nonprofit organizations, as well as for the U.S. Department of Labor. His first comic, "The Colorblind Cannibal," was published by Platform Comics in 2020. You can follow Nikolai on Twitter @Nikolai_Fomich

Though all this information can be inferred, what the black pin signifies is not explicitly stated on page one, and so readers are encouraged to turn the page to learn more. Page two is an… [more]

The final page of the opening scene, page three, is a splash page. In fact, the boy literally emerges from the depths with a splash. This splash page is effective in part because it follows… [more]

Several years ago, I received a rejection letter from 2000AD in the mail for a story I had pitched called “The Colorblind Cannibal”. In the letter was a brief note explaining that the story didn’t… [more]

From Fan Favorite to Most Despised: The Curious Case of Dr. Hank McCoy

There was a time in the ‘90s when, if a fan was asked to name their top five X-Men, there was a good chance Hank McCoy would be among them. Maybe you thought Cyclops was… [more]

Yet the Alice books do not celebrate our heroine’s change, as suggested by Alice’s several disturbing mirrorings with older women. Three of the four major women in Alice’s Adventures in Wonderland and Through the Looking-Glass… [more]

The seminal Batman graphic novel Arkham Asylum: A Serious House on Serious Earth, by writer Grant Morrison and artist Dave McKean, recontextualizes the themes and the motifs of Lewis Carroll’s Alice’s Adventures in Wonderland and Through the Looking-Glass… [more]