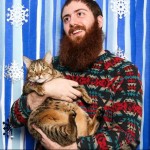 Matthew Meylikhov is perhaps best known as the founder and former Editor in Chief of the Eisner-nominated Multiversity Comics, and for his in-depth annotations for the New York Times Best Selling Image Comics series Morning Glories, found in the back of each issue. However, Matthew Meylikhov is also notable for his works as a cat trainer and beard grower. A writer, editor and letterer, Meylikhov was once referred to as "okay enough" by his closest friend and strives daily to be a little bit less disappointing than the day before.

Michel Fiffe’s Copra: The Most Well-Known Secret in Comics

Copra is the most well-known secret in comics. Everyone seems to know its name, one repeatedly shouted from digital rooftops in choruses of “all hail!” by ardent fans and critics alike, and it’s a roar… [more]

A Long Time Ago in a Galaxy Far, Far Away, This Probably Would’ve Been Better: A Review of Aaron and Cassaday’s Star Wars #1

Star Wars #1 by Jason Aaron and John Cassaday has perhaps one of the best openings to a Star Wars comic ever. From that perfect blue font with those familiar opening words to the double-page… [more]