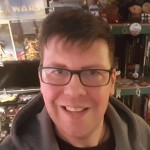 Mark was first caught in the Star Wars tractor beam back in late 1977, when Star Wars finally arrived in the UK. He launched Lightsabre in late June 1999 and after a decade as one of the UK's best known Star Wars sites merged with Jedi News in August 2010, where he is the co-owner and Daily Content Manager. He has written for Star Wars Insider since 2006 and has contributed to DeAgostini's Build The Millennium Falcon partwork as well as writing for Geeky Monkey magazine. He is an Honorary Friend of both the 501st and the Rebel Legion and is co-host of RADIO 1138 and Take Cover on the Jedi News Network.

The Road to Rogue One

This time last year, as we were preparing to dig into the delights of The Force Awakens, long-time fans knew that at the very least the thought of doing a seventh episode and a third… [more]