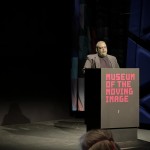 Jesse Berberich is a playwright and media critic born and raised in New York City. He is the curator of Disreputable Cinema, a monthly series at the Museum of the Moving Image in Queens, NY that presents cult classics and hidden gems of every genre. His criticism and other writings have appeared in the print publications G-Fan Magazine, Drive-In Asylum, and Revisions: a Journal on Writing at Queens College. He received his MFA degree from Queens College, with his thesis play, Monster Kids, having been recently performed at the famous INTAR Theatre.

Previously, I explored the themes of Chris Ware’s landmark graphic novel Jimmy Corrigan, the Smartest Kid on Earth — specifically the role and function of the superhero in this piece and even beyond in Ware’s… [more]

Chris Ware’s seminal graphic novel Jimmy Corrigan, the Smartest Kid on Earth is a masterwork wherein Ware chronicles the struggles of main character, Jimmy, as he navigates through life, eventually meeting his estranged father for… [more]