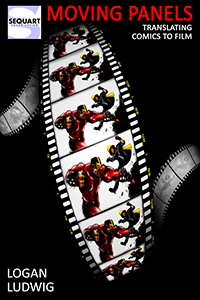 Are comics just storyboards for films that would be too expensive to ever actually commit to celluloid? Are movies just comics with added motion? These two media have become more closely tied in recent years, thanks to a bevy of comic-book adaptations, and seem naturally related. Both are comprised of visual storytelling techniques that would seem readily compatible, but are they really that similar?

Moving Panels: Translating Comics to Film digs into this issue, analyzing through careful examination of aesthetics just how similar and dissimilar the two media are. By looking at films and comics such as Scott Pilgrim Vs. the World, Watchmen, Persepolis, and Sin City, Logan Ludwig teases out just how the two media interact, their respective strengths and weaknesses, and how similar they really are.

Logan Ludwig spent his youth immersed in comics, films, and TV. When he went to college those passions only deepened as he pursued a degree in Film Studies from Wesleyan University. After graduation he continued to work and follow those passions, which has led him to writing about all of those media on his blog, http://watch-up.tumblr.com/, and wherever else will have him.