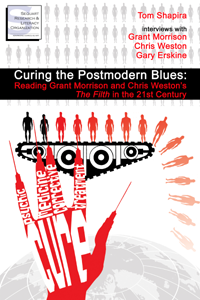 Published in 2002-2003, Grant Morrison and Chris Weston’s The Filth is disgusting, deeply disturbing, and a comic-book masterpiece that inoculates readers against the problems of the postmodern condition.

So says Tom Shapira, who also explores The Filth‘s relationship to Morrison’s The Invisibles, to the 1999 film The Matrix, and to the work of Alan Moore. The book also includes interviews with Grant Morrison, Chris Weston, and inker Gary Erskine, plus art from Weston illuminating the design of the series and containing imagery censored in the printed comic.

Tom Shapira is a carbon-based life from the planet earth. He was formed in the year 1985 AD by two loving parents. He is also an MA student of English Lit. at Tel-Aviv University, Israel, where he feels proud to be the first student to graduate with a BA by writing a paper about the works of Grant Morison. In his native tongue, Tom is a staff writer for Israel's leading comics blog Alilon.net and an occasional participant in the blog's bi-weekly podcast. He spends too much time, money and thought on Comics (especially the works of Grant Morison, Alan Moore, Warren Ellis and Garth Ennis) and his friends and family wish he would stop. He is not going to.